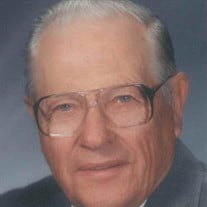 Earl Wayne Undem, 93, Rogers, ND, passed away Sunday, March 18th, 2018 at Sheyenne Care Center, Valley City, ND. Earl was born October 31, 1924 to Torwell and Ruth (Wakefield) Undem at the home farm near Rogers, North Dakota. He attended school at Coleman School in Rogers Township and graduated from College High after which he began a lifelong career in farming. He met the love of his life, Alice Mae Roller, and they were married on October 9, 1949 at Harvey, North Dakota. An active member of Dazey Assembly of God Church, Earl served as treasurer for many years. He loved playing and watching baseball. Family was always a priority in Earl’s life. He enjoyed spending time with his family and watching his grandchildren grow up. His gentle spirit and quiet sense of humor will be greatly missed. He is survived by his wife, Alice Undem; his children, Keith (Rollis) Undem, Apple Valley, MN; Barbara (Kenneth) Schmitz, Valley City; Rebecca (Rick) Holmberg, West Fargo; Nancy (Kerry) Larson, Plover, WI; Mark (Kim)Undem, Valley City; Tom Undem, Rogers; Jeff (Teri) Undem, Valley City; 14 grandchildren, and 24 great-grandchildren. One brother, Duane Undem, Valley City, also survives. He is preceded in death by his parents, Torwell and Ruth; sister, Laura Dreis; and brothers Orville, Freeman, Roy, Harold, and Ralph. Earl’s funeral will be celebrated at 2:00 pm Saturday, March 24th at the First Church of the Nazarene in Valley City, ND. Visitation will be held Friday from 5:00 pm to 7:00 pm at Oliver-Nathan Funeral Home Chapel, Valley City, with a prayer service at 7:00 PM Friday in the chapel. Visitation will continue one hour before the service at the church on Saturday. Memorials may be directed to Sheyenne Care, Hospice of the Red River Valley, or Dazey Assembly of God Church. Funeral arrangements have been entrusted to the care of the Oliver-Nathan Funeral Chapel. A guestbook for condolences may be found at www.oliver-nathanchapel.com

The family of Earl Wayne Undem created this Life Tributes page to make it easy to share your memories.

Send flowers to the Undem family.