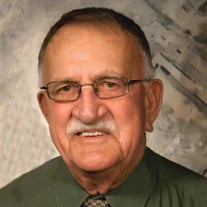 Earl Eugene Regner was born November 11, 1932 at the family homestead in LaMoure County, North Dakota, the son of Emil and Cora (Kuhn) Regner. He attended Schindeldecker School in Prairie Township and Marion High school. Earl was united in marriage to Marjorie Olson on April 17, 1953 at St. John’s Lutheran Church parsonage, rural Marion, North Dakota. They made their home on Earl’s family’s homestead where they farmed until retiring in the late 1990’s. Earl was a member of Trinity Lutheran Church where he served on the council and was involved in various activities. He was on numerous boards including Prairie Township, Litchville School, Marion Equity Elevator and Farm Home Administration. He was a 4H leader, sharing his knowledge and love for farming with others. He received the LaMoure County Conservation Award for his farm, which was recognized as a Centennial Farm, having been established June 27, 1889 in the Dakota Territory. Earl was very proud of the homestead. He enjoyed people and loved activities such as square dance, music, fishing and hunting. In retirement he did woodworking and owned Earl’s Sawdust Shop. He took pride in his woodworking which was evident in the quality of his projects. He taught himself the computer and texted his family daily. He enjoyed breakfast at home and breakfast away, 2 breakfasts a day. His vehicle was known for automatically driving into Tower City for a piece of pie. Earl and his wife Marjorie of 63 years, passed away exactly two weeks apart. She was the love of his life and always considered her brothers and sisters his family. Earl is survived by three daughters, Donna (Scott) Flach, Bismarck, ND, Carol Schumacher, St. Peter, MN, Robin (Darren) Miedema, Litchville; a son, Steve (Wendy) Regner, Fargo, ND; eight grandchildren, nine great grandchildren and one great great grandson. He has three nieces, Marilyn (Dennis) Hasler, Jane (Ken) Aller, Lisa (Jim) Zalusky, two nephews, Chad Seefeldt and Rodney Lebahn. He was preceded in death by his wife Marjorie, his son, Robert, his parents, Emil and Cora Regner, his sisters Roseda Lebahn and Pearl Seefeldt, his niece Karen Lebahn and his nephew Darrell Seefeldt.

The family of Earl Eugene Regner created this Life Tributes page to make it easy to share your memories.

Earl Eugene Regner was born November 11, 1932 at the family homestead...

Send flowers to the Regner family.