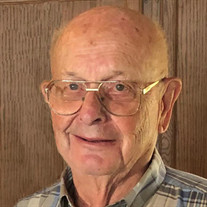 The Celebration of Life service for Dr. Grant Zwick, 83, Valley City, North Dakota, will be held at 11:00 am, Saturday, April 3, 2021 at Oliver-Nathan Funeral Chapel, Valley City for immediate family members. Rev. Emmy Swedlund will officiate and the burial will be in Woodbine Cemetery, Valley City. Grant died on Tuesday, March 30, 2021, surrounded by his three children under the care of Mercy Hospital. Visitation will be on Saturday from 9:00 am until 10:30 am at Oliver-Nathan Funeral Chapel, Valley City. Grant Gale Zwick was born July 5, 1937 in Fargo, North Dakota, the son of William and Guida (Porter) Zwick. He grew up in Valley City, graduating from Valley City High School in 1956. Grant attended the University of North Dakota and graduated from the University of Minnesota School of Dentistry where he earned a Doctor of Dental Science in 1963. He practiced dentistry in Valley City until retiring in 2009. On June 19, 1960, he was united in marriage to Ellen Benzinger in Valley City, where they made their home. Ellen passed away on May 31, 2004 in Valley City. Grant was a kind hearted person with an adventurous spirit. He was a pilot, enjoyed sailing, traveling, spending time at his lake cabin, and cherished his family and friends. He will be deeply missed as a father, grandfather, and friend. He was a member of Our Savior’s Lutheran Church, Valley City. Grant is survived by daughter, Rozalyn (Bill) Allyson, Inver Grove Heights, Minnesota and their children Riley and Zoe Allyson; sons Ryan Zwick, Fargo, North Dakota and his daughter, Renaie Zwick; and Reed (Martina) Zwick, Prague, Czech Republic and their children Sabina and Sebastian Zwick; and his brother Dwight Zwick, Denver, Colorado. He was preceded in death by his parents, wife Ellen, brother Kent Zwick, and stepfather Carsten Karlstad. Memorials are suggested to be made to Our Savior’s Lutheran Church Foundation, Valley City, or The American Cancer Society. Funeral arrangements have been entrusted to the care of the Oliver-Nathan Funeral Chapel, Valley City. An online guestbook is available at www.oliver-nathanchapel.com

The family of Dr. Grant Zwick created this Life Tributes page to make it easy to share your memories.

The Celebration of Life service for Dr. Grant Zwick, 83, Valley...

Send flowers to the Zwick family.