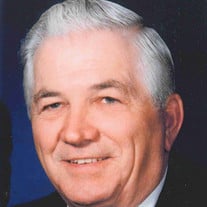 Douglas R. Oglesby, 91, passed peacefully in his sleep, August 22, 2014 at Maryhill Manor in Enderlin, ND. His funeral service will be 1:30 PM, Tuesday, August 26, 2014 at the Oliver-Nathan Funeral Chapel, Valley City, ND. Visitation will be held the hour prior to the funeral. Burial will be in the ND Veterans Cemetery on Wednesday, August 27, 2014. Doug was born to Art and Freda (Flach) Oglesby in Sanborn, ND. He along with four sisters and two brothers were raised on a farm outside of Wimbledon, ND. Doug was the oldest of 7 children. In 1941, he enlisted in the US Army at the age of seventeen. He completed officers training program in Ft. Knox, Kentucky before going to North Africa with the 1st Armor Division in 1943. In 1944, Doug also served in Italy during the Anzio Invasion. He was honorably discharged in 1946. In 2008, his son George accompanied him to Washington, DC in honor of all living WWII veterans. Doug married Alvera Shockley in 1947 and together they had 5 children. He pursued a degree in education, graduating from Jamestown College with a Bachelor’s of Science Degree. He later pursued a Masters Degree in Administration from the University of North Dakota, Grand Forks. Doug’s first teaching job was in Sutton, ND. From 1952-1961, he was Superintendant of Schools in Hurdsfield, ND. Doug moved his family to Esparto, CA in 1961 and was Superintendant of Schools there for 8 years. In 1969, he returned to ND where he was Superintendant of Schools in Enderlin for 10 years. In 1975, Doug married Louella Harrison. They enjoyed life together for 36 years. During that time he served as Superintendant of Schools in Garrison, ND and North Central, ND. He retired in 1983 with over 35 years in education. He was known as an avid fisherman and hunter and spent many a day fishing with family and friends on the lakes in Canada and hunting in the Dakota Badlands and Red River Valley. He was a life member of the VFW as well as belonging to the American Legion and Eagles Club. Doug was also a member of a number of administrator and teacher associations including the ND Administrators Association and the ND Education Association. Mr. Oglesby is survived by his two daughters, Melodye (Lyle) Thompson of Seattle, WA and LeeAnn Matson of Wenatchee, WA; three sons, Doug (Sandy) of Eldorado Hills, CA, George (Peggy) of Lone Tree, CO, and Nayland of Leavenworth, WA; four step-children, Victor (Carolyn) Harrison, James Harrison, Glenda (Larry Reidman), and Debbie (James) Lochow; 18 grandchildren; 24 great grandchildren; 9 great great grandchildren; sisters, Elverna Becker and Ardella Fugelstead; and many nieces and nephews. He was preceded in death by his parents; wife, Louella; and siblings, Norman, Art, Francis, and Rose. Oliver-Nathan Funeral Chapel of Valley City, ND has been entrusted with the arrangements for Doug’s service. Please sign the register book online at www.oliver-nathanchapel.com

The family of Doulas R. Oglesby created this Life Tributes page to make it easy to share your memories.

Send flowers to the Oglesby family.