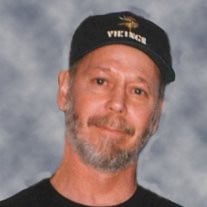 A memorial service for Douglas Freehauf, 60, Hastings, ND, will be held at 10:00 A.M., Monday, July 22, 2013 at Spring Creek Lutheran Church, Hastings. Visitation will be held at the church an hour prior to the service. Douglas Eugene Freehauf was born on March 26, 1953 in Lisbon, ND, the son of Gordon and Carmen (Johnson) Freehauf. He grew up on the family farm near Alice, ND and attended Enderlin Public School. Doug was a member of the class of 1971 and went on to attend NDSCS in Wahpeton, ND. He worked at the elevator in Alice before moving to Oakes, ND where he worked at various jobs before Land ‘O Lakes driving a milk truck. He enjoyed his route and the people he met. Doug moved to Valley City, ND and began working at the Rogers Elevator. Due to health reasons, he had to retire. He moved to Hastings, ND and spent his days doing what he loved and spending time with his sweetheart, Stephanie. Family was very important to Doug. He was especially proud of his children. Second only to his love of his family was his love for the Minnesota Vikings and Twins Doug was an avid fisherman. His favorite spot to fish was the Kathryn Dam, although he would fish anywhere and usually find the spot they were biting. He also enjoyed hunting deer, pheasants, and asparagus. Doug belonged to the Barnes County Wildlife Club and was a member of the ND Pottery Collectors Society. He was a collector and was always on the lookout for additions to his collections. One of the highlights of his life was his trips to Oregon with Stephanie. On July 18, 2013, Doug died bravely and peacefully at Kindred Hospital in Fargo, ND. He is survived by his long time love and companion, Stephanie Hesse of Hastings, ND; his mother, Carmen Freehauf of Valley City; son, Wade (Ashley) Freehauf of Mayville, ND; daughter Stephanie Freehauf and her special friend, Neal Bruns of Willmar, MN; brother, Terry (Jeannette) Freehauf of Pelican Rapids, MN; sister, Janice (Clayton) Smith of Oakes, ND; nieces and nephews, Jason (Rachel) Freehauf, Sheila (Jay) Swanson, Joshua Smith, and Brena Smith; and an aunt, Phyllis Cox of Fargo, ND. He was preceded in death by his father and an infant son, Cody Freehauf. Arrangements for Doug have been entrusted to Oliver-Nathan Funeral Chapel, Valley City, ND. An online guestbook is available at www.oliver-nathanchapel.com

A memorial service for Douglas Freehauf, 60, Hastings, ND, will be held at 10:00 A.M., Monday, July 22, 2013 at Spring Creek Lutheran Church, Hastings. Visitation will be held at the church an hour prior to the service. Douglas Eugene Freehauf... View Obituary & Service Information

The family of Douglas Freehauf created this Life Tributes page to make it easy to share your memories.

A memorial service for Douglas Freehauf, 60, Hastings, ND, will...

Send flowers to the Freehauf family.