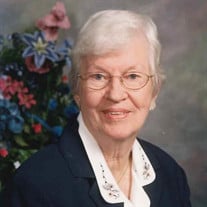 The memorial service for Dorothy L. Foell, 93, Valley City, North Dakota will be 11:00 am Saturday, May 6, 2017 at Faith Lutheran Church, Valley City. Inurnment will be 11am Monday, May 8 in the North Dakota Veterans Cemetery, Mandan, ND. She died Tuesday, April 11, 2017 at the Sheyenne Care Center, Valley City. Dorothy Louise Johnson was born September 22, 1923 in Dickinson, North Dakota, the daughter of Jerome and Edna Ruth (Fisher) Johnson. She attended and graduated from Killdeer (ND) High School. She was united in marriage to John Foell on April 6, 1946 in Glendive, Montana. They made their home in Killdeer, where her husband began a 28 year career with John Deere Company before moving to Burlington, ND in 1954. In 1970, her husband was transferred to Fargo, ND, where they lived for two years until retiring to their lake home on Big Cormorant Lake. In 1991, they moved to Valley City. John died on May 9, 1994. She continued to make her home in Valley City. She entered the Sheyenne Care Center in May 2010. She was a member of Faith Lutheran Church. Dorothy is survived by two sons and a daughter, Randy (Sandy) Foell, Des Lacs, ND, Dr. Kim (Cheryl) Foell, Valley City, and Sidney (Bruce) Lekson, Isanti, MN; 11 grandchildren and 21 great grandchildren. She is also survived by two sisters-in-law, Betty Johnson, San Diego, CA, Idella Johnson, Tucson, AZ; and several nieces and nephews. She was preceded in death by her parents and husband, a granddaughter, Amy Harbough, three brothers, Duane, Milton and Clayton; and a sister, Blanche Bang. Funeral arrangements have been entrusted to the care of the Oliver-Nathan Funeral Chapel, Valley City. An online guestbook for Dorothy is at www.oliver-nathanchapel.com

The memorial service for Dorothy L. Foell, 93, Valley City, North Dakota will be 11:00 am Saturday, May 6, 2017 at Faith Lutheran Church, Valley City. Inurnment will be 11am Monday, May 8 in the North Dakota Veterans Cemetery, Mandan, ND.... View Obituary & Service Information

The family of Dorothy Louise Foell created this Life Tributes page to make it easy to share your memories.

Send flowers to the Foell family.