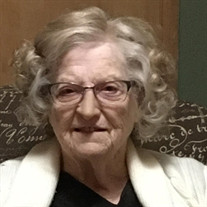 The funeral is live streamed at https://vimeo.com/event/1501760 Doris Helen Wolhart passed away at CHI Mercy Hospital, Valley City, North Dakota in the early hours of Saturday, November 6, 2021. She left us in her sleep escorted to Heaven by the angels. Doris was born on March 27, 1930 to Berger and Esther (Fossum) Faust. She grew up on a farm seven miles southwest of Valley City. Doris attended Green Consolidated School for most of her education, but graduated from Valley City High School in 1948. She married Arden Wolhart in 1950, and together they raised six children. Doris and Arden were permanent residents of Valley City. Doris was a dedicated Christian. She attended First Baptist Church and was there almost every time the doors were open. Doris sang in the choir, worked in the Sunday school and Awana program, held offices in the mission circle and was the church treasurer for years. Doris supported the city’s Christian Coffee House, visited people at the Sheyenne Care Center and looked after many, many children in her home. Doris and her husband took some trips to see relatives and to see the sights. They went to Norway once with the Valley Troubadours. She was always amazed that she had actually landed in Iceland for a brief time. After Doris was widowed, she lived comfortably for almost a decade. (Of late she had been ill only for a couple of weeks.) She was of good mind and aware of her surroundings on her last day…which was filled with a roomful of grandchildren and great-grandchildren!!! Doris leaves behind four children and a daughter-in-law which include: Nancy Wolhart of Fargo, ND, Calvin (Jewel) Wolhart of Jamestown, ND, Arlene (Kevin) Knudson of Larimore, ND, Neal (Heather) Wolhart of Crawford, NE and Becky Wolhart of Valley City. She has eleven grandchildren: David, Jonathan, Karol, Kalan, Kelly, Nicholas, Nathan, Nolan, Scott, Jennifer and Steven. There are a few handfuls of “growing” great-grandchildren who will complete her story. Preceding Doris in death were her husband Arden, two sons Glenn and Keith, her parents, her sister Bernice and many friends. As to her services, there will be a viewing at First Baptist Church of Valley City at noon on Friday, November 12, 2021, followed by her funeral service at 1:00 pm, her burial will be at Memory Gardens, Valley City and then, after this a luncheon back at the church with a time of sharing. All are invited to come! Funeral arrangements have entrusted to the care of Oliver-Nathan Funeral Chapel, Valley City. An online guestbook is available at olivernathanchapel.com

The funeral is live streamed at https://vimeo.com/event/1501760 Doris Helen Wolhart passed away at CHI Mercy Hospital, Valley City, North Dakota in the early hours of Saturday, November 6, 2021. She left us in her sleep escorted to Heaven... View Obituary & Service Information

The family of Doris Wolhart created this Life Tributes page to make it easy to share your memories.

Send flowers to the Wolhart family.