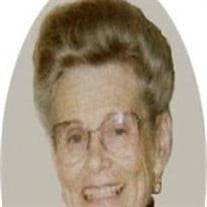 Dorine was born April 12, 1925 near Fort Ransom, ND to Harold and Ingaborg (Johnson) Smith. She graduated from high school in Nome, ND and went on to graduate from North Dakota Agricultural College (NDSU) where she earned a home economic extension degree. After graduation she worked as an extension agent in Pembina County. On February 21, 1948 she was united in marriage to Irvin Dale Morrison at Zion Lutheran Church in Nome, ND. After their wedding they began their family in Carson and Cooperstown, ND where Dale was County Agent. When Dale took a job with the state department they moved to Libya, Afghanistan, and Nigera. After returning from overseas, they returned to the sand prairie near Kathryn, ND operating both a confinement hog operation as well as farming. Upon retirement they wintered in Apache Junction, AZ until Dale’s death. Community involvement was always a high priority with Dorine, and she loved to entertain people with home cooked food and conversation. While overseas she was a trainer for host nation local schools, was the Principal and Superintendent of the American school in Kandahar, Afghanistan, and taught home economics classes at the local college in Akure, Nigeria. She was an active member of the church, chairing committees, acting as a delegate, volunteering, as well as leading various bible studies and Sunday school classes. She was always available with a warm smile and a listening ear. She was survived by her children, Linda and her husband Bill Cooper of Caldwell, ID, Doug and Lorinda (Fornes) Morrison, of Mesa, AZ, Mary and her husband Jerry Schoppy of Liberty Hill, TX, and 4 grandchildren, Jon Cooper, Kristin Cooper, Tina Morrison, and Ken Morrison, numerous cousins and friends everywhere she lived. She was preceded in death by her parents and her husband Dale in 2001. Condolences can be sent to: The Morrison Family 11555 55th Street SE Kathryn, ND 58049

Dorine was born April 12, 1925 near Fort Ransom, ND to Harold and Ingaborg (Johnson) Smith. She graduated from high school in Nome, ND and went on to graduate from North Dakota Agricultural College (NDSU) where she earned a home economic extension... View Obituary & Service Information

The family of Dorine Morrison created this Life Tributes page to make it easy to share your memories.

Send flowers to the Morrison family.