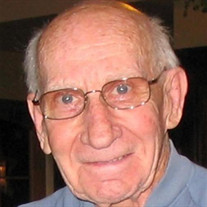 Donnell Theodore Nasseth died peacefully from natural causes in hospice care on March 7, 2015. He developed Dementia and Parkinson’s Disease, but even then lived with grace and thankfulness. Don was born in Olympia, WA on September 1, 1926 to Jorgen Nasseth of the island of Frøya, Norway, and Clara Laura (Borg) Nasseth of Hardin, N.D. He grew up in Valley City, ND, where he attended VCHS, and was a member of the track, basketball, and football teams. Don was inducted into the Navy at age 17, and was stationed at Treasure Island Naval Hospital as a Pharmacist Mate 3rd Class during WWII. After the War, he returned to Valley City, attended Valley City State Teachers College (now VCSU) and earned a B.A. degree in business. He was employed as a salesman by Peavey Company (Occident) Milling Company in Valley City and traveled throughout his sales territory in North Dakota and Minnesota. He earned several sales honors and attended several conferences regarding milling, baking, and sales. He married Donna Lou Peterson of Valley City in June 1952. Don and Donna had two children: DeAna Lyn, and Danni Thomas. Don’s parents were both Salvation Army officers, and they moved frequently to different posts throughout the northwest until they settled permanently in Valley City. Don was the “man” of the house while growing up, since his dad died in 1937 when Don was still 10 years old. He learned many hard lessons as a child. He had a strong sense of responsibility to do his part to help provide for his mother and siblings, and was not above working hard in manual odd jobs to provide meager earnings to help his family. He carried heavy water buckets for railroad workers, pulled weeds in a nursery, delivered newspapers, and collected coal spilled along the railroad track to keep their house warm. He worked summers at his uncle’s farm to earn his keep and bring a few resources home to his family. He learned the value of a nickel, and grew up with a strong work ethic of doing your best job at everything you do, and being dependable, honest, loyal, respectful, orderly, thorough, persistent, and helpful without being asked. Don was a quiet young man, but he cultivated lifelong buddies in his early years. Don was a member of the Valley City Post 60 A of the American Legion, served as Legion Commander, and played trumpet in the Legion Band, which won the Miami national competition during his tenure. He was an outdoor enthusiast, and he enjoyed annual fishing trips to remote fly-in locations in Saskatchewan, Canada, with his fishing buddies, as well as hunting pheasant, ducks, and geese in southeastern North Dakota. He also enjoyed landscaping and manicuring his lawn and plants, and took great pride and interest in researching and selecting particular horticultural varieties. Although he was outwardly a reserved man and professed dislike of social situations, he enjoyed telling jokes, teasing his kids and grandkids, and visiting with family and neighbors. Don’s Norwegian and Swedish ancestry was always a topic of interest to him, and the family observed ancestral traditions at holidays. Don was transferred by Peavey Company to Fargo, ND in 1963, Houston, TX in 1967, and Billings, MT in 1971, where he and Donna lived for 37 years. In Billings, Don left his territorial sales career and became a real estate agent for Hamwey Realty until his retirement. He and Donna took pride in keeping up their home and yard. They loved to host guests at their home. They traveled to visit children in Colorado and California; siblings in Illinois, Indiana, and Oregon; and to Norway, Europe, and Hawaii. In 2008, Don and Donna moved to Colorado Springs, CO to downsize, address health issues, and be closer to their children and grandchildren. Donna died in January, 2009, and Don continued to live in independent living, then assisted living and memory care at MacKenzie Place in Colorado Springs. Don is preceded in death by his wife, Donna Lou Peterson, sisters DeLoris Wood and Thelma Swartout, and brother Clayton. He is survived by his daughter DeAna Nasseth, son-in-law Dennis Schneider, grandson Dustin Schneider, granddaughter Dana Schneider; son Dan Nasseth, daughter-in-law Lisa, grandson Sean, and granddaughter Kelli. A graveside memorial service with military honors will be held at Woodbine Cemetery in Valley City, ND at noon on June 13, 2015. All are welcome. Memorial arrangements are being made by Oliver-Nathan Funeral Home in Valley City, telephone (701) 845-2414, or online at http://www.olivernathanchapel.com.

Donnell Theodore Nasseth died peacefully from natural causes in hospice care on March 7, 2015. He developed Dementia and Parkinson&#8217;s Disease, but even then lived with grace and thankfulness. Don was born in Olympia, WA on September 1,... View Obituary & Service Information

The family of Donnell Nasseth created this Life Tributes page to make it easy to share your memories.

Send flowers to the Nasseth family.