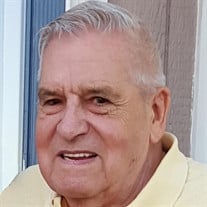 Donald's funeral service will be live streamed at https://vimeo.com/638732896 Donald Orin Liebing, 90, Jamestown formally of Marion, North Dakota passed away Saturday, October 23, 2021 at Ave Maria Village under the care of JRMC hospice. He was born on the farm home south of Marion on November 25, 1930 to Arthur and Beatrice (Duven) Liebing. When he was four years old he moved with his parents and big sister Luella north of Marion. He attended Greenland Township consolidated school and graduated from Marion high school in 1948. He was a natural born mechanic who began his career as a toddler removing the wheel nuts from a guest’s car. His crowning glory was using the front half of one car and connecting it to the back half of another. It was the family car for a long time. In 1951 he was united in marriage to Myrtle Verduin of Hastings North Dakota, and in 1952 he was drafted into the US Army for the Korean conflict. They had four children Roger, Thomas, Karen, and Steven. He worked for Trapp implement and had a small shop of his own after returning from Korea. He later purchased Walter Piehl Trucking. He and his family worked very hard together to make it a success. Along with using his mechanical ability, he loved to fish and play cards. In his older life he was stricken with blindness, poor hearing, and at the time of his death he could not walk or use his hands. He was not a complainer, keeping a good attitude and doing whatever he could. In retirement Don and Myrtle enjoyed traveling, fishing, and camping. He was a member of the Jamestown Church of the Nazarene where his service will be on Thursday morning October 28 at 11 AM. Rev. Jim Kraemer will be officiating. Burial will be at Lakeview cemetery, Marion North Dakota. Don was preceded in death by his grandson Cody, his parents, his sister Luella TenPas, a brother and sister in infancy, and two brothers-in -law. Don is survived by his wife Myrtle of 70 years, children: Roger (Andrea)of Eldridge, IA; Thomas (Laurie) of Marion ND; Karen (Art) Perleberg of Broadus ,MT; and Steven of Longmont, CO; 9 grand children and 15 great-grand children. He is also survived by his sisters, Beth (Dennis) Johnson of Vermillion, SD and Myrna (Gerald) Ferm of Lake Havasu City, AZ. In lieu of flowers please consider a gift to the charity of your choice. We suggest hospice of JRMC, Ave Maria Village, or Lakeview cemetery at Marion ND. Funeral arrangements have been entrusted to the care of the Oliver – Nathan funeral chapel, Valley city. And online guest book is available at www.oliver-nathanchapel.com

The family of Donald O Liebing created this Life Tributes page to make it easy to share your memories.

Send flowers to the Liebing family.