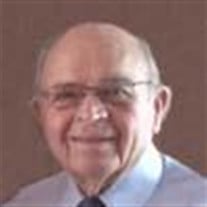 Donald Duane Boom, 83, a life-long resident of the Marion, North Dakota area passed away on June 8, 2017 at Sanford Health, Fargo, North Dakota surrounded by his family. Donald Duane Boom was born in Marion, North Dakota on October 16, 1933 to Harold and Gertrude (Van Bruggen) Boom. He attended Greenland school before joining his father as the 3rd generation to farm the family’s farm. Donald was united in marriage to Dorothy Van Dyk on November 12, 1953 in Colton, South Dakota. They made their home back on the farm where they raised four children. Their son, Dwight, joined them in farming making him the 4th generation to toil the family farm. He enjoyed painting pictures, gardening and working with his hands. He liked listening to and singing music. Donald was also passionate about missions and was a longtime member of the Gideon’s. Donald and Dorothy liked to travel and spent many winters in Arizona. And let us not forget about how much he enjoyed the men’s breakfast and coffee mornings in Arizona and back home in Marion at the Marion Café. Donald was a member of the North Marion Reformed Church where he served on several positions on the church board. He is survived by his wife, Dorothy, of 63 years; two sons, Dwight (Karin) Boom, Marion, Duane Boom, Minneapolis, MN; two daughters, Darla (Brad) Carpenter, Dickey, ND, Diane Burton, Lenexa, KS; one sister, Joanne (Conrad) Harthoorn, Greenwell Springs, LA; six grandchildren, Brent Carpenter (Lacey Wagner), Jamestown, ND, Elijah (Sarah) Burton, Fairfield, CA, Tanner(Taylor) Burton, Kansas City, MO, April, Deidra and David Boom, Jamestown; and five great-grandchildren, Chloe Carpenter, Jamestown, Sawyer, Nolan, Eleanora and Archer Burton of Fairfield, CA. Donald was preceded in death by his parents, Harold and Gertrude Boom, one brother, Lloyd Boom and a son-in-law, John Burton. The funeral service for Donald will be 10:00 am Monday, June 12th at North Marion Reformed Church. Visitation will be 2-5 pm Sunday Oliver-Nathan Funeral Chapel, Valley City. Visitation will continue one hour before the service. Burial will be in North Marion Cemetery. Memorials may be directed to the Gideon’s or North Marion Church. Funeral arrangements for Donald have been entrusted to the care of the Oliver-Nathan Funeral Chapel, Valley City. An online guestbook is available at www.oliver-nathanchapel.com

The family of Donald Duane Boom created this Life Tributes page to make it easy to share your memories.

Donald Duane Boom, 83, a life-long resident of the Marion, North...

Send flowers to the Boom family.