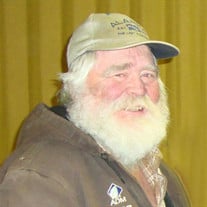 Dennis Leroy Helland was born May 13, 1947 in Valley City, ND to Denver and Mabel (Olson) Helland. He was raised on the family farm near Kathryn, ND. Denny was baptized and confirmed in St. Paul Lutheran Parish, Kathryn. He attended school at Hastings, ND and graduated from College High School, Valley City, ND in 1965. Dennis graduated from North Dakota State University, Fargo, ND in 1969 with a BS degree in Agricultural Engineering. He returned to the family farm to continue his farming career until his death. Dennis also worked for a time at the West Fargo Stockyards. He was an avid hunter and served as a Hunter Education Instructor for 30 years. He was a pilot with a love for aviation. Denny actively supported the Barnes County Airport and served as a member of the Barnes County Airport Authority Board for 39 years. He was chairman of this board for 15 years. Dennis also was a member of the Hastings Fire Department, serving as chief for 10 years. On November 25, 1978, he married Paula Jean Emerson. They raised 2 sons, Karl and Kevin. Dennis is survived by his wife, Paula; his sons, Karl (Ginger) Helland of Kathryn and Kevin of Littleton, CO; and grandchildren, Taylor, Kody, Kolten, and Koy. He is also survived by his sisters, Marlene (Tom) Sagaser of Jamestown, ND, Deloris (Larry) Welken of Valley City and Donna (Roger) Hentges of Fargo and many nieces and nephews. He was preceded in death by his parents; grandparents; niece Jill Hentges Hogue and nephew Steven Welken. There will be a celebration of Dennis’ life on Friday, November 7, 2014 beginning at 5:00 PM at the VFW Club in Valley City. In lieu of flowers, memorials are preferred to the Valley City State University Steven Welken Scholarship Endowment, the Fargo Air Museum, or the Barnes County Ambulance Service. Dennis died at his home under hospice care on November 1, 2014. Oliver-Nathan Funeral Chapel of Valley City has been entrusted to assist the family with arrangements. An online guestbook is available at www.oliver-nathanchapel.com

Dennis Leroy Helland was born May 13, 1947 in Valley City, ND to Denver and Mabel (Olson) Helland. He was raised on the family farm near Kathryn, ND. Denny was baptized and confirmed in St. Paul Lutheran Parish, Kathryn. He attended school... View Obituary & Service Information

The family of Dennis Helland created this Life Tributes page to make it easy to share your memories.

Send flowers to the Helland family.