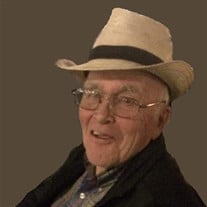 Pancakes, syrup, wontons, ice cream floats… these are the things his grandchildren will remember about him. Delmar Duane Smedshammer acquired his angel wings on Friday, July 26th, at Rosewood on Broadway, just a few weeks shy of his 92nd birthday. Delmar was born on the family farm by Litchville, ND, on August 13, 1927, to Martin and Esther (Haugen) Smedshammer. He graduated from Litchville Public Schools in 1946 and attended Wahpeton School of Science for 6 months. In 1950 he was drafted into the army and served two years, being honorably discharged in 1952. In the army he was assigned to the 30th Engineer Topographical Battalion, Ft. Winfield Scott, San Francisco, CA; and the 549th Engineer Base Survey Company, Yuma, AZ and Unalakleet, AK. During this time, Delmar formed many lifelong friendships that were celebrated through many reunions over the years. In 2016, Delmar participated in the Honor Flight to Washington D.C. On June 11, 1956, Delmar married Margaret Lakoduk from Butte, ND. They made their home on a farmstead south of Litchville, growing crops, milking cows, and raising cattle. They were blessed with five children and later, four grandchildren. In addition, Delmar drove school bus for the Litchville School District from 1963-1975. Delmar continued to help his son Duane on the family farm into his 90’s. All who knew Delmar, knew he loved to visit over a cup of coffee. He was also known to play a card game or two. He loved taking trips with his family: houseboat excursions, cruises, Cabo, and Hawaii. Nothing made him happier than being with his children and grandchildren. As they have become adults, his grandchildren appreciate even more his work ethic, kindness, dedication to family, and his witty sense of humor. They will greatly miss him and the twinkle in his beautiful blue eyes. Delmar is survived by four children: Duane (Tammy Crist), Marlin, Kevin, and Carlene Larson (Craig); grandchildren: Jena Smedshammer (Jake Johnson), Tanner Larson, Brittany Larson, and Ashley Smedshammer; great-grandchildren: Taylor Johnson and Nathaniel Larson. He is also survived by his brother Curtis Smedshammer (Phyllis) and his sisters Elaine Hilscher (Jim) and Maxine Smedshammer. He was predeceased by his wife Margaret (2003) and toddler daughter Darcy (1962).

Pancakes, syrup, wontons, ice cream floats&#8230; these are the things his grandchildren will remember about him. Delmar Duane Smedshammer acquired his angel wings on Friday, July 26th, at Rosewood on Broadway, just a few weeks shy of his 92nd... View Obituary & Service Information

The family of Delmar Duane Smedshammer created this Life Tributes page to make it easy to share your memories.

Pancakes, syrup, wontons, ice cream floats… these are the things...

Send flowers to the Smedshammer family.