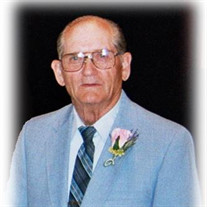 Dean Stafford Omdahl, age 88, of Valley City, ND, formerly of Dazey, ND, died November 29, 2016 at the Sheyenne Care Center. Dean was born March 11, 1928 in Conway, North Dakota to Lars and Hanna (Nielsen) Omdahl. He attended school up until 8th grade, but later got his GED. He enlisted in the U.S. Navy on December 6, 1945 and served until October 2, 1947. He worked in Inkster and Niagara, North Dakota before his marriage. He was united in marriage to Mary Sisson on October 25, 1952 in Fordville, North Dakota. They made their home in Courtenay, North Dakota for 13 years, where Dean worked as the custodian at the high school. In 1968 they moved to Dazey and worked for the Farmer Union Co-op Elevator and later purchased it and continued working until he retired in 1990. Mary died on December 24, 2009. Dean became a resident at the Sheyenne Care Center in Valley City in September 2010. Some of his favorite hobbies included gardening, canning, and deer hunting. He also enjoyed spending time with all of his grandchildren. Dean is survived by his sons, Neil (Kaye) of Rogers, ND, Jay (Lori) of Dazey, Joel (Vickie) of Rogers, Bret (Paulette) of Oriska, ND, and Jamie of Dazey; 22 grandchildren; 19 great grandchildren; two brothers, Lloyd of Grand Forks, ND, Glenn of Seattle, Washington, and one sister, Grace Eisner of Forest River, ND. He was preceded in death by his parents, five brothers, two sisters, and one great granddaughter, Aaliyah Fountain. The funeral service will be held Saturday, December 3rd at 10:30 a.m. at Assembly of God Church in Valley City. Visitation service is at 7 p.m. on Friday at Oliver-Nathan Funeral Chapel, Valley City, ND. An online guestbook is available at www.oliver-nathanchapel.com

The family of Dean Stafford Omdahl created this Life Tributes page to make it easy to share your memories.

Send flowers to the Omdahl family.