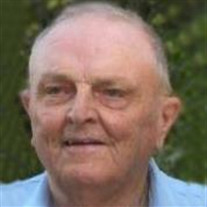 Dean Junior McInnes, 96, formerly of Marion, ND, passed away on October 30, 2019 in New Richmond, WI. A memorial service will be held at The Deerfield in New Richmond on Saturday, November 16, 2019 at 2 p.m. with a visitation one hour prior. A graveside service will be held at Memory Gardens near Valley City, ND in the spring. Dean was born to Grant and Blanch (Miller) McInnes on July 23, 1923 on a farm north of Tower City, ND. He moved into Page, ND in 1937 where he graduated High School in 1941. He attended the University of MN for 1 year followed by a year at UND. Dean was drafted in February 1944 and chose to become a Marine. He served as courier between the US Chief Naval officer in Europe and the head of British Services. He returned to Officers Candidate School in Quantico VA, graduating as a 2nd Lieutenant. He was stationed in Tientsin , China before being honorably discharged. Dean then enrolled and graduated from UND in 1951 with a degree in accounting. He was married on June 27, 1951 to Shirley Margaret Skonnord. They became active residents in the community of Marion, ND where Dean took over as manager of J.C. Miller Elevator. He served as mayor of Marion, was on the church board, the draft board of LaMoure County and was a lifetime member of the VFW. Dean enjoyed hunting, golf, and his family. He and Shirley spent 36 winters in Mesa, AZ where they danced, played cards and made many friends. Dean played on the Mesa Regal pool team. He retired in 1988, continuing to live in Marion until 2009 when they moved to Jamestown, ND. In 2013 they moved to New Richmond, WI. He was preceded in death by his wife Shirley, son Kim, his parents, and one brother, Claire. He is survived by daughters Jill (Tim) Wieland of Woodbury, MN and Shelly McInnes of New Richmond; daughter-in-law Dianne (Don) Bear of Jamestown; grandchildren Matt (Courtney) and Josh (Carolyn) Wieland; Hannah (Matt) Schooler, Adrian (Ian) Haugen and Alex McInnes; 5 great grandchildren, Callum, George, John, Olivia and Isabella Wieland. Arrangements are being made by Oliver-Nathan Funeral Chapel, Valley City, ND. An online guestbook for Dean is available at www.oliver-nathanchapel.com. In lieu of flowers, memorials are preferred to Marion Lutheran Church or Litchville-Marion Dollars for Scholars.

Dean Junior McInnes, 96, formerly of Marion, ND, passed away on October 30, 2019 in New Richmond, WI. A memorial service will be held at The Deerfield in New Richmond on Saturday, November 16, 2019 at 2 p.m. with a visitation one hour prior.... View Obituary & Service Information

The family of Dean Junior McInnes created this Life Tributes page to make it easy to share your memories.

Send flowers to the McInnes family.