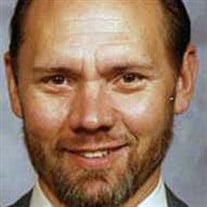 Dean Fritch was born January 23, 1940 in Valley City, North Dakota, the son of Andrew and Dorothy (Ecker) Fritch. He graduated from College High School in 1958. Dean was united in marriage to Marlene Faye Wolff in June 1961 in Wimbledon, North Dakota. They moved to Porterville, California in 1963 where he was a bus driver and was a Fuller Brush and Watkins Sales Person. He was also in the National Guard, where he obtained Sargent status. Dean and Marlene returned to Valley City in 1969 and he became a partner with his dad in the Fritch Garden and Greenhouse business. He graduated from Valley City State University in 1982 and Hawkeye Institute of Technology in Waterloo, Iowa in 1988. He spent a total of 15 years of over the road trucking for Wylie of Fargo, Dave's Pizza Corner of Valley City, and Newman at Clifford, North Dakota. He was an active member of the First Nazarene Church and served in multiple roles with a passion for missions. He led Bible Studies for 11 years at Sheyenne Care Center nearly every Saturday. He especially loved photography, gardening, and observing nature. He enjoyed listening to many different genres of music. Dean is survived by his loving wife Marlene of 56 years, a sister, Ruth (Dick) Kremer, Valley City, ND; two sons and three daughters, Wayne (Shari) Fritch, Cedar Rapids, Iowa; Kalynn (Calvin) Mayers, Kelliher, Minnesota; Kathleen Fritch of Valley City, ND; Daniel (Joanne) Fritch, Melbourne, Australia; Kristine (Seth) Acuna of Peculiar, Missouri. He is also survived by 9 grandchildren, McKenzie (Gary) Raduns, Lucas Fritch, Lisa Mayers, Deborah Mayers, Steven Mayers, Laura, Benjamin, & Carolyn Fritch and Mikaela Acuña; great grandchildren, Lindsey Mayers and Ian Mayers. He is preceded in death by his father Andrew Fritch; mother Dorothy Fritch; and a sister Janet Votaw. Dean died June 4, 2017 at Sanford Health, Fargo, North Dakota. The funeral service for Dean will be 10:30 am Friday, June 9, at Church of the Nazarene, Valley City. Visitation will be 5-7 pm Thursday at the church with a prayer service at 7 pm. Visitation will continue one hour before the service. Burial will be in Memory Gardens, Valley City. Memorials may be designated to: Church of the Nazarene Building Fund. Funeral arrangements for Dean have been entrusted to the care of the Oliver-Nathan Funeral Chapel, Valley City. An online guestbook is available at www.oliver-nathanchapel.com

Dean Fritch was born January 23, 1940 in Valley City, North Dakota, the son of Andrew and Dorothy (Ecker) Fritch. He graduated from College High School in 1958. Dean was united in marriage to Marlene Faye Wolff in June 1961 in Wimbledon, North... View Obituary & Service Information

The family of Dean Alan Fritch created this Life Tributes page to make it easy to share your memories.

Send flowers to the Fritch family.