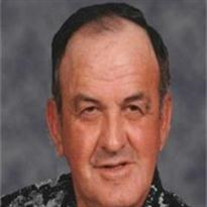 Darrel L. Lettenmaier was born on October 1, 1933 in Valley City, ND, the son of Theodore and Clara (Johnson) Lettenmaier. He grew up in Heman Township, south of Sanborn. He attended rural school and was a 1951 graduate of Sanborn High School. Darrel began farming with his mother after his father passed away and continued after his schooling. On September 14, 1957, he married Carol Lettenmaier in Sanborn. They made their home near Sanborn and moved into town in 1964. He continued farming until 1974. At that time, he began working full time at Ellison Enterprises. Darrel went on to work at Cenex in Valley City, ND for almost 20 years. He also worked at Mr. Spindle and drove truck for Blatner with the Ashtabula Wind Farm. He retired in 2010. He was on the Sanborn Fire Department for 48 years, serving as chief for 10. Darrel was instrumental in starting the annual 4th of July Demolition Derby in Sanborn. He served on the city council and was mayor for 4 years. He was deputized by the Barnes County Sheriff’s Department, was a jailor, and did security at the ND WinterShow for 20 years. Darrel was on the Fairview Cemetery Board for a number of years, and served as president for most of those years. He was a longtime member of the Eagles and a lifetime member of Our Savior’s Lutheran Church of Sanborn, where he served on the council. Darrel died May 23, 2012 at Sanford Palliative Care in Fargo, ND. He is survived by his wife, Carol and son Terry both of Valley City; daughters, Debbra Lettenmaier of Fargo, ND, Patricia (Alex Pivovarov) Pitts of Minneapolis, MN, and Shelly (Kent) Kosse of Valley City; grandchildren, Tyler (Jenn Larson) Kosse, Joshua (Jess Blaser) Pitts, and Alisa (Brandon) Kosse Rakoczy; great grandchildren, Ava, Avery, Arianna, and Addison; a brother, Calvin (Ila) Lettenmaier of Sanborn; a sister, Becky (Everett) Aarestad of Superior, MT; and many nieces and nephews. He was preceded in death by his parents and a sister, Glee Luther.

Darrel L. Lettenmaier was born on October 1, 1933 in Valley City, ND, the son of Theodore and Clara (Johnson) Lettenmaier. He grew up in Heman Township, south of Sanborn. He attended rural school and was a 1951 graduate of Sanborn High School.... View Obituary & Service Information

The family of Darrel Lettenmaier created this Life Tributes page to make it easy to share your memories.

Send flowers to the Lettenmaier family.