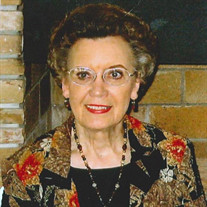 Darlene (VanBruggen) Kluvers passed away at her home in Mesa, AZ, on July 24, 2020. Darlene was born on October 12, 1930 (along with twin sister, Arlene) to Ben and Gertrude (Lengkeek) VanBruggen, at their home in rural Montpelier, ND. She attended grade school first at Manns School, near Montpelier, ND, and later attended Clark City School, in rural Marion, ND. She received her high school diploma from American School of Correspondence. Darlene married Harvey Kluvers on September 29, 1950, at the North Marion Reformed Church, rural Marion, ND. The newlyweds started life together on the Kluvers family farm near Litchville, ND, and stayed there until retirement. Darlene was a dedicated farmer’s wife, working hard alongside Harvey as his favorite farmhand. Besides the usual tasks from planting to harvesting, she raised three children, many dogs and cats, maintained the house and yard, and kept a huge garden. In addition to providing wonderful fresh produce all summer, she took the time to can and freeze goodies for the winter. She was perhaps best known for the many variations of delicious pickles that she painstakingly tended in crocks until they were ready for the jar. In later years, when children and grandchildren came for visits, they could be relied upon to ask for “Mom’s/Grandma’s pickles” at the first meal. Darlene was active in the First Reformed Church of Litchville, serving in various offices of the Reformed Church women, teaching Sunday school, and providing music for local events and distant retreats with voice, piano, and accordion. Keeping track of three children certainly contributed to the busyness of Darlene’s life. She was a caring Mom, putting their needs ahead of hers. During their growing-up years, Darlene faithfully contributed time and energy to all church and school activities in which the three participated. When high school brought non-stop sporting functions and music concerts, Darlene and Harvey were sure to be in the crowd for every local, and many distant events, cheering on and applauding their kids and teammates. Darlene and Harvey both enjoyed travel and did so extensively during semi-retirement, most often taking in farm tours domestically and internationally. Although every journey was special, they particularly looked forward to adventures in their pull trailer, taking advantage of the freedom to explore the United States, Canada, and Mexico. When not in motion, they spent their winters in Mesa, AZ, eventually settling full time there in 2015. Darlene is survived by her husband of almost 70 years, Harvey, and by one son, Marlin (Polly) Kluvers, and two daughters, Peggy (Jim) Shouse, and Lorraine Stephenson. Grandchildren are Ben Kluvers, Kelly (Terry) Williams, Allison Kluvers, Dan (Shawna) Shouse, and Russell Shouse, and great-grandsons, Clayton Shouse and Declan Shouse. Also surviving are her brother, Gerald (Janet) VanBruggen, and sister, Arlene Vahl. Darlene was preceded in death by her parents and parents-in-law, Ralph and Bess Kluvers. In lieu of flowers, memorials may be sent to the First Reformed Church of Litchville, ND. Condolences can be shared by mailing a card to Harvey Kluvers, 520 S. Higley Road, Unit 221, Mesa, AZ, 85206. A memorial service will be held at a later date. The Oliver-Nathan Funeral Chapel, Valley City, ND, is in charge of arrangements. An online guestbook is available at www.oliver-nathanchapel.com

Darlene (VanBruggen) Kluvers passed away at her home in Mesa, AZ, on July 24, 2020. Darlene was born on October 12, 1930 (along with twin sister, Arlene) to Ben and Gertrude (Lengkeek) VanBruggen, at their home in rural Montpelier, ND. She... View Obituary & Service Information

The family of Darlene VanBruggen Kluvers created this Life Tributes page to make it easy to share your memories.

Darlene (VanBruggen) Kluvers passed away at her home in Mesa,...

Send flowers to the Kluvers family.