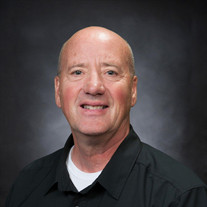 Daniel Allan Johnson, age 55, of Valley City, ND, passed away at Mercy Hospital on Saturday, February 10, 2018. Dan was born in Valley City, ND to Allan (Butch) and Vicki Johnson (Christianson) on August 29, 1962. He spent his younger years in Valley City. His family moved to Lamoure, ND, then to Miles City, MT for a few years and then moved back to Valley City in the 1970’s. He graduated from Valley City High School in 1980. He attended and graduated from Valley City State University in 1985. He started teaching for the Maple Valley School District in the fall of 1985 and remained there until his death. Dan had a fun and energetic way of getting through to his students. Many of his students may remember this quote he would often share, “If you fail to plan, you plan to fail.” He married Jody Schwab on August 1, 1995 at Lake Tahoe, CA. Dan and Jody have two sons, Jesse and Jacob. Dan always appeared to be running for public office as in any public setting you could find him shaking hands and working the crowd. His positive attitude and cheerful heart has left an impression on everyone who knew him. He may have been known by any of the following alias’ - Danny, Boone, DJ, Lids, Son Brother, Mr. J, Danielson, or any other nickname not listed. Dan touched countless lives teaching, coaching, mentoring, and advising those of all ages. The most important lives he touched were of his wife, Jody, and his sons, Jesse and Jacob. You could always find him alongside Jody supporting their sons on the sidelines or in any bleachers. Although he was the sports enthusiast, he mentored his sons to be the best they can be off the field and court. Off the sporting fields you may have spotted him driving his 4-wheeler up and down the streets of Valley City. He was very active in the Valley City Baseball Association and Maple Valley Education Association. Dan was a member of Faith Lutheran Church in Valley City. He was an amazing husband, father, brother, brother-in-law, uncle, cousin, nephew and friend. Dan would want you to remember him through his wit and funny sarcasm so you would be left with a smile and not tears. Dan is survived by his wife, Jody; sons, Jesse and Jacob; sister, Darcy; a niece, Sammy; and many aunts, uncles, cousins, nieces, nephews, and in-laws. Dan was preceded in death by his parents. The memorial service for Daniel Allan Johnson, 55, Valley City, North Dakota, will be 2 pm Friday, February 16, at Faith Lutheran Church, Valley City. A prayer service will be held 7 pm Thursday, February 15, at the church. Burial will be in Hillside Cemetery, Valley City. Funeral arrangements have been entrusted to the care of the Oliver-Nathan Funeral Chapel, Valley City. An online guestbook is available at www.oliver-nathanchapel.com

The family of Daniel Allan Johnson created this Life Tributes page to make it easy to share your memories.