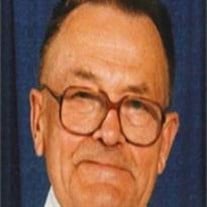 Dale S. Schmitz was born to Claude & Helen (Johnson) Schmitz, August 20, 1928. He attended grade school at the Cornell School and started 7th grade at Tower City, North Dakota, graduating salutatorian of the Class of ‘46. He attended NDSU for 2 years. Dale married Evelyn C. Largis, June 27, 1948 at Zion Lutheran Church in Twin Valley, Minnesota. They lived on the farm near Tower City, ND until September 27, 1948 when they moved into Valley City, North Dakota. Dale started working for Mr. Richard Morris at Morris Auto Electric in 1948. Dale purchased the business with Lawrence Heckman in 1957. After Lawrence retired, Dale worked alone until 1976. Dale’s son, Ken, went to work for him in 1976, when they also changed the name to S&S Auto Electric. In 1993 Ken, along with his wife Barb, purchased the business from his dad and is the current owner of S&S Auto Electric. Dale continued to walk to the shop every morning until his health failed. Dale was confirmed at Trinity Lutheran Church in 1950 where he was an active member, on the council, ushered, and taught Sunday School Classes. He was also a member of the Eagles, Elks, Knights of Pythias, North Valley Investment Club, and the Barnes County Wildlife Foundation. Dale was a hard worker for every task that he tried. He was never too busy to help anyone and he was known for being a wonderful host. Dale enjoyed life, family, friends, hunting and fishing. He especially enjoyed spending quality time with his grandchildren and great-grandchildren. Dale S. Schmitz is survived by his wife, Evelyn C. (Largis) Schmitz of 64 years; sons, David, Billings, MT; Kenneth (Barb) Valley City, ND, daughters, Peggy (Kevin) Gould Willmar, MN; Debra (Tom) Ringuette Fargo, ND, 10 grandchildren, 9 great-grandchildren, 4 nephews and a sister-in-law Donna Schmitz in Texas. Dale was preceded in death by his parents and his brother John.

The family of Dale Schmitz created this Life Tributes page to make it easy to share your memories.

Send flowers to the Schmitz family.