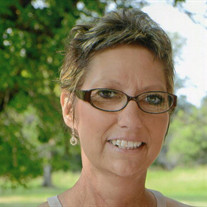 Crystal Renee Rittenhouse, 49 passed away on March 2nd, 2016 at her home in valley city, ND after a brief struggle with cancer. Crystal was born on Jan. 6, 1967 in Sacramento, CA to Curtis and Beverly Sadek. Crystal spent her younger years becoming quite the gymnast. She had a love for horses. Crystal loved to swim and be outdoors. In 1982 Crystal met the love of her life Stephen Rittenhouse whom she later married. Together Stephen and Crystal had four beautiful children. They spent many years residing in California, but in 2000 they moved to Valley City, ND. Crystal was well known for her passion of cooking. She worked in restaurants throughout her life. She could whip up anything it seemed. Whether she had a recipe or not she made up her own creations. Crystal spent a lot of her time in the kitchen. Her cooking seemed to attract all of the neighborhood kids so it seemed she was always cooking for an army. She thoroughly enjoyed that though! You never left her house hungry. Crystal is survived by her four children Stephen, Nicholas, Jillian, and Adam; her grandchildren, Brycen, Aubrey, Bentley, Rylee, Karsyn, Brenton, Brinna, and two on the way; her mother Beverly Sadek, her sisters, Cathy Burr and Connie Plecity and her brother, Curtis Sadek all of valley city. Many nieces and nephews, cousins, and friends Crystal is preceded in death by her husband Stephen Rittenhouse, father, Curtis Sadek, and brother, Kevin Sadek The funeral service will be 2 pm Monday, March 7, at New Life Assembly Church, Valley City with Pastor Lucas Aufenkamp officiating. A prayer service will be 7 pm Sunday at the church. Funeral arrangements are by Oliver Nathan Funeral Chapel, Valley City. An online guestbook is available for Crystal at www.oliver-nathanchapel.com

Crystal Renee Rittenhouse, 49 passed away on March 2nd, 2016 at her home in valley city, ND after a brief struggle with cancer. Crystal was born on Jan. 6, 1967 in Sacramento, CA to Curtis and Beverly Sadek. Crystal spent her younger years... View Obituary & Service Information

The family of Crystal Renee Rittenhouse created this Life Tributes page to make it easy to share your memories.

Send flowers to the Rittenhouse family.