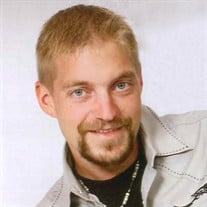 Cody Thomas Liebing, 35, Rio Rancho, New Mexico, formerly of Marion, North Dakota, died in a tragic ATV accident, Sunday, July 16 in New Mexico. Cody Thomas Liebing was born June 30, 1982 to Tom and Laurie (Graalum) Liebing in Valley City, North Dakota. He graduated from Litchville-Marion High School in 2001. He was an electrician apprentice for Grotberg Electric and Enterprise Electric in Valley City before attending Lake Region State College in Devils Lake, North Dakota. Upon graduation, he began his career as a flight simulator technician at the Kirtland Air Force Base in Albuquerque, New Mexico, where he was currently employed. He had a unique ability for fixing flight simulators, and was sent several times to Andrews Air Force Base, Washington, D.C. to work on their simulators. He married Marie Adams on September 16, 2006 in Albuquerque. A son, Thomas was born August 9, 2007. Cody enjoyed hunting, fishing, and anything to do with guns. He had a real knack for fixing things, and was the kind of guy who would give the shirt off his back to a stranger. The joy of his life though was his son, Thomas. He loved camping, shooting guns, riding four-wheeler, making things, and just spending time with him. Cody is survived by his son, Thomas, Rio Rancho; parents, Tom and Laurie Liebing, Marion; one brother, Travis Liebing, Valley City; one sister, Krista (Jordan) Olson, Anoka, Minnesota; grandparents, Duane and Faye Graalum, Valley City, and Donald and Myrtle Liebing, Jamestown, North Dakota; and numerous aunts, uncles, and cousins. The funeral service will be 11 am Saturday, July 22, 2017 at Grace Free Lutheran Church, Valley City, North Dakota. Visitation will be one hour before the service at the church. Burial will be in Nordheim Cemetery, rural Kathryn, North Dakota. Funeral arrangements have been entrusted to the care of the Oliver-Nathan Funeral Chapel, Valley City. An online guestbook is available at www.oliver-nathanchapel.com

The family of Cody Thomas Liebing created this Life Tributes page to make it easy to share your memories.

Send flowers to the Liebing family.