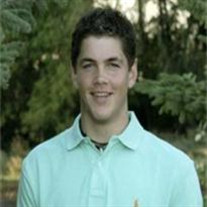 Cody Wayne Lahr was born March 23, 1988 in Cedar Rapids, IA, the son of Wayne and Jennifer (Cline) Lahr. As a child, he moved with his family to ND and lived in the Fingal and Tower City areas. He graduated from Maple Valley High School in 2007 and was currently attending Moorhead Technical College. Throughout high school, he worked at Valley Meat in Valley City. This past summer he worked for Master’s Construction in Fargo, ND. Cody was currently employed at the Good Samaritan Society in Fargo. He loved working with the elderly. On November 30, 2006, Cody enlisted in the ND National Guard. He was a member of Detachment 2 of the 815 Engineering Company. He completed his basic training on October 27, 2007. SPC Lahr received the ND Basic Training Ribbon, the National Defense Service Medal, and the Army Service Ribbon. Cody was a member of St. Catherine Catholic Church in Valley City. His pastimes included hunting, bow hunting, fishing, and just being outdoors. He enjoyed spending time with his family and friends. He is survived by his mother, Jennifer (John) Kohler of Valley City; father, Wayne Lahr of Enderlin, ND; Jon Lahr of Valley City; sister, Ashley Lahr of Valley City; step-sister, Brook Kohler of Valley City; grandparents, June Cline of Browerville, MN, Pete and Hedy Lahr of Cushing, MN, and Ken and Norma Jean Kohler of Valley City; a special friend, Lindsey Berge of Fargo; and many aunts, uncles, and cousins. He was preceded in death by his grandfather, Walter Cline. ~Cody’s Testimony~ When I first met Cody in FYE class, the very first thing I notices was the fact that he had the ability to make everybody smile and laugh. He had such a passion and love for all of his family and friends. Little did I know that Cody was in search of so much more. We were assigned a project to introduce ourselves, and I went up and shared my faith in the Lord, because He is my life. I went up to present myself in hopes to touch some peoples’ lives, and show God to them in any way that I possibly could. This was the first day that Cody and I spoke. It turned out that God was calling out to Cody through the faith in God that I had shared. As I began to get to know him, it was almost like I could see to the very heart of him; Cody was searching for so much more out of life. We began to talk till about 4 in the morning and he shared with me about his life without shame. He explained to me about his past and the decisions he made, and about how he wanted to change his life around. He wanted a special touch from the Lord. He began to come to every church event that I attended which included Chi Alpha, Church on Sunday mornings at Bethel, and Prism for college students at Bethel. Out of all of these, Prism was what Cody got most excited about. Sundays would come around and he would have such a joy on his face and he’d say “We get to go to Prism tonight!! Don’t forget your Bible!” He would always talk about how much he wanted his brother and sisters to come to Prism along with him. Cody first started coming to these Church events not really knowing what to expect. He would just sit there and soak everything in. As time passed, he began to feel God’s Holy Spirit tugging at his heart. Cody surrendered his life to the Lord, and accepted the Lord into his heart about 5 months ago. I began to see a whole different spark in his eye, and his happiness then turned into a constant Joy that overflowed. Cody began to run after God’s will for his life with all of his heart. He knew that God had a specific purpose for him alone. He started reading the Bible every day, and would call me with such excitement about what he had read. He told me that God was speaking into his life. Cody’s life was completely turned around, and his Faith became his own. More recently God laid on his heart that he should start serving in any way possible. He felt like God was leading him to help out in the junior high youth group as a leader. He also wanted to help with an organization called ELL (English Language Learning), which was an organization to help foreign kids around the Fargo area to understand the English language a little better, and help tutor them while they were in school. Cody’s willingness to help serve the Lord is a testimony in itself even now when he is gone. One of the very first things that Cody had said to me was that he believed that God sent me into his life for a reason; he just didn’t understand what it was. I know now the reason why. I see that these last few months of Cody’s life God yearned for Cody to know Him. I am so thankful that God would use me in his life, and that He would bless me with such a wonderful best friend. Cody has left a legacy for all of us to see, and I know his hope for all of us would be to know and experience the love of Christ that he lived out. ~Lindsey Berg

Cody Wayne Lahr was born March 23, 1988 in Cedar Rapids, IA, the son of Wayne and Jennifer (Cline) Lahr. As a child, he moved with his family to ND and lived in the Fingal and Tower City areas. He graduated from Maple Valley High School in... View Obituary & Service Information

The family of Cody Lahr created this Life Tributes page to make it easy to share your memories.

Send flowers to the Lahr family.