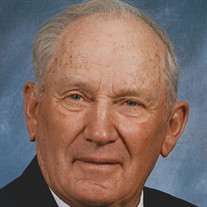 The funeral service for Clayton R. Velure, 92, Valley City, North Dakota will be 11 am Saturday, March 20, 2021 at Our Savior’s Lutheran Church, Valley City. Visitation will be one hour before the service at the church. Burial will be later in the spring in Memory Gardens, Valley City. The funeral service will be available to view via live stream at https://vimeo.com/524941668 He passed away Tuesday morning, March 16, at his home. Clayton Richard Velure was born March 28, 1928 on the family farm near Hastings, North Dakota. He was the son of William and Dorothy (Larson) Velure. Clayton attended Hastings High School until his senior year when he attended and graduated from Litchville (ND) High School in 1946. After graduating he worked for Reitan’s Hardware Store in Hastings. Clayton was united in marriage to Beverly Berntson on August 22, 1948 at Ringsaker Lutheran Church, near Valley City. They began farming near Hastings in April of 1951 and retired in 1990 to Valley City. Clayton was a member of Our Savior’s Lutheran Church, a former member of Spring Creek Lutheran Church, Hastings, where he also served on the church council. He served on Oakhill Township Board, Barnes County FHA Board and Barnes County Weed Board. Clayton was also a member of the Eagles. He enjoyed playing cards, dancing, listening to old time music, bowling and watching his grandchildren and great grandchildren in their sporting events. His hobbies included collecting old cars and then being able to drive them around. Clayton is survived by his wife of 72 years, Beverly; his son Ricky (Rindy) Velure, Kathryn, North Dakota; two daughters, Deborah (Dean) Ross, Valley City, and Julie Tower, Valley City; six grandchildren; 12 great grandchildren; a sister Shirley Willson, Valley City; a sister-in-law Arlene Velure, Valley City and several nieces and nephews. He was preceded in death by his parents and two brothers Robert Velure and John Velure. Memorials may be directed to Hospice of the Red River Valley. Funeral arrangements have been entrusted to the care of the Oliver-Nathan Funeral Chapel, Valley City. An online guestbook is available at www.oliver-nathanchapel.com

The funeral service for Clayton R. Velure, 92, Valley City, North Dakota will be 11 am Saturday, March 20, 2021 at Our Savior&#8217;s Lutheran Church, Valley City. Visitation will be one hour before the service at the church. Burial will be... View Obituary & Service Information

The family of Clayton Velure created this Life Tributes page to make it easy to share your memories.

Send flowers to the Velure family.