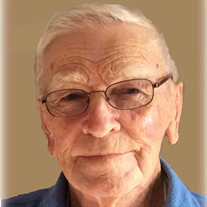 The funeral service for Clayton Pederson, 94, Valley City, North Dakota will be 2 pm Saturday, February 18, 2017 at Faith Lutheran Church, Valley City, with Rev. Jolene Knudson-Hanse officiating. Clayton died Monday, February 6, 2017 at his home under the care of his family and CHI Health at Home - Hospice. Burial will be in the North Dakota Veterans Cemetery, Mandan, ND. A time of gathering will be Friday, February 17, from 5 pm to 7 pm at the Oliver-Nathan Funeral Chapel. Clayton (NMI) Pederson was born August 20, 1922 in Marsh Township, Valley City, the youngest of six children born to Carl A and Elna (Haugard) Pederson. He grew up on the family farm, and graduated from Valley City High School in 1940. Clayton was one of few people in high school (students and staff) with a car and at one point was asked to drive the victim of an accident in shop class to the hospital. He drove for the basketball team, and his junior year, he also drove the Debate team on an overnight trip to Aberdeen. Clayton was a very good shot, rifle or shotgun and was part of many hunting expeditions with family and neighbors - fox and waterfowl primarily. He was a Native America artifact hunter and collector mostly arrowheads and hammers and could see an arrowhead from the seat of the tractor (pre-cab days). Clayton saw a good bit of the world as a young man. After high school he traveled to Los Angeles where Aunt Minnie and Uncle Nels had a large dairy and brothers Roy and Carl had jobs in the defense industry. He got a job at Lockheed partly on his ability to type and never typed a page, a story that repeated late in life. He was hired as the admin assistant/secretary and rose up fast due to ability and need. Lockheed was using space at Disney Studios due to needs of WWII. His office was near that of Walt Disney himself. Clayton soon had a white badge, which meant he had full access to all parts of the company. Disney would screen movies for some of Lockheed while they were in production for feedback. Clayton was probably one of the first non-Disney employees to ever see Bambi. He was then sent to Northern Ireland where Lockheed was building facilities for the war including airport runways where he at one point was in charge of the ready-mix plant. He acquired the nickname of "The Batchplant Kid”. He was drafted in 1944 while in Ireland and returned to Los Angeles to be inducted. Clayton was a member of the Army 10th Mountain Division and was deployed to Italy. When victory in Europe was declared his return to the US was aboard B-17s with a trip down through Africa across to Brazil and up to Miami. He was on a troop train traveling through Texas bound for the Pacific Theatre when the war with Japan ended. His military time ended playing baseball in Wyoming and he was discharged in June 1946. Clayton traveled to Point Barrow, AK, after discharge, and worked for companies doing exploratory work for oil and defense interests. Again, it was the typing ability that got his foot in the door. He had a number of hunting adventures with the Inuit people. He returned home to Marsh Township, bought land and started farming. He married Isabelle Bous in November 17, 1951. They started milking cows, and continuing with son Dennis, until the cows were sold in 2000. Isabelle died in 2013. They were content to stay at home and their longest time away from home, was moving into Valley City during the floods of 2009 and 2011. He is survived by his son Dennis (Gail) Valley City, and daughters Diane (Alvin) Wald, Berlin, ND, and Sam, Valley City; six grandsons - Evan Pederson (Alexandra Wilson), Anchorage, AK, Blaine (Katie) Pederson, Bozeman, Mt, Marshall Pederson, Valley City, Jesse Wald, LaMoure, ND, Jason (Abby) Wald, Berlin, ND, and Dylan (Rachel) Wald; Willow City, ND; and great grandchildren Toni, Tana and Ty Wald, Ava and Opal Wilder, and Ellis Pederson with two more on the way. He is also survived brother-in-law Robert and Madella Bous, sisters-in-law Leona Smith, Wilma Finseth, Ginny & (Jim) Arone, Jeanne Bous; and many nieces and nephews. He was preceded in death by siblings Roy, Carl and Russell Pederson, sisters, Peggy Pederson, and Jean Miller. Funeral arrangements have been entrusted to the care of the Oliver-Nathan Funeral Chapel. An online guestbook is available at www.oliver-nathanchapel.com.

The family of Clayton Pederson created this Life Tributes page to make it easy to share your memories.