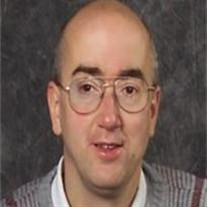 Christopher George Watkins was born September 10, 1962 in Charlotte, NC, the son of Arthur and Colleen (Nelson) Watkins. He grew up in Detroit Lakes, MN and attended First Baptist Church. He then moved to the Fargo/Moorhead area and graduated from Fargo North High School in 1980. Chris spent many of the next years in the food service industry. He also attended Interstate Business College and received a degree in Business Management. Soon after this, Chris found Christ Jesus as his Lord and Savior on August 22, 1991. A few years later, he graduated from Dakota Baptist Bible Institute. On May 16, 1998, Chris was united in marriage to Jeanie Olson. In 2001, they moved to Valley City, ND. While in Valley City, he became part of a new church, Calvary Baptist Church, and drove truck for a living. Chris is survived by his wife, Jeanie and 4 daughters, Lydia, Esther, Anna, and Hope all of Valley City; his mother, Colleen Nelson of Fargo; father, Arthur Watkins of Elizabethtown, NC; brothers, Dan Watkins of Fargo and David (Alessandra) Warm II of Fargo; sisters, Karen Boss of Albert Lea, MN, Rebecca Bauer of Albert Lea, MN, and Cathy Knight of Fargo; mother-in-law, Loretta Hong of Fargo; sisters-in-law, Jackie Custer of Fargo and Laurie (Jim) Tweeton of Catawissa, MO; brother-in-law, Dan (Tawnia) Olson of Kindred, ND; and several nieces and nephews. Chris loved children, and enjoyed being a Sunday school teacher, VBS worker and van route driver in his church in Valley City. Many lives were touched by this quiet, yet hard working man. For several years, he was a Bible Camp counselor, and enjoyed working with the youth. Even with a very busy schedule, Chris desired to help kids who needed help, which meant taking in foster children and mentoring. Chris enjoyed fishing with his girls, helping home school his children and gardening. He will be greatly missed by his family, friends, and church. He was preceded in death by his grandparents; brother, Michael Watkins; an infant sister; and an infant child.

Christopher George Watkins was born September 10, 1962 in Charlotte, NC, the son of Arthur and Colleen (Nelson) Watkins. He grew up in Detroit Lakes, MN and attended First Baptist Church. He then moved to the Fargo/Moorhead area and graduated... View Obituary & Service Information

The family of Christopher Watkins created this Life Tributes page to make it easy to share your memories.

Send flowers to the Watkins family.