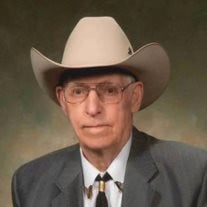 Chris Van Hal was born on June 21, 1924 in Pipestone, MN, the son of Chris and Gertie (Miedema) Van Hal. As a young man he moved to the Marion, ND area and attended rural school. Chris was a custom baler for several years. On March 24, 1953, he was united in marriage to Cornelia DeBoer. They made their home in Valley City, ND where he later began doing carpentry work. After a time, Chris worked for his brother, Vance, doing home and apartment construction. In 1970, he began his own home building business. Chris built his first pickup camper and he and Cornelia enjoyed many camping and fishing trips to the Minnesota lakes area. Cornelia passed away on August 30, 1995. Chris continued living in Valley City until June 2012 when he moved to Elim Care in Fargo, ND. Chris was a member of the First Baptist Church in Valley City. Chris died at Elim Care in Fargo on January 22, 2014. He is survived by his son and daughter-in-law, Edward and Kimberly Van Hal of Fargo; his brother, Vance Van Hal of Nampa, ID; sisters, Gertrude Nels of Cedar Rapids, IA, Martha Kruger of Worthington, MN, and Maria Schneiderman of Cedar Rapids, IA; and a sisters-in-law, Jeanette Van Hal of Worthington, MN and Marlys Van Hal of Valley City, ND. He was preceded in death by his parents; wife; brothers, Harry, Jake, and Martin Van Hal; and sisters, Dora Van Dyke and Minnie Hector. The funeral service for Chris Van Hal, 89, Fargo, ND, formerly of Valley City ND will be held at 2:00 PM, Saturday, January 25, 2014 at the First Baptist Church, Valley City. Burial will be in the spring in Hillside Cemetery, near Valley City. Visitation will be on Friday from 4:00 PM until 7:00 PM at the Oliver-Nathan Funeral Chapel, Valley City. There will also be visitation an hour prior to the service at the church on Saturday. Funeral arrangements for Chris have been entrusted to Oliver-Nathan Funeral Chapel. An online guestbook is available at www.oliver-nathanchapel.com

Chris Van Hal was born on June 21, 1924 in Pipestone, MN, the son of Chris and Gertie (Miedema) Van Hal. As a young man he moved to the Marion, ND area and attended rural school. Chris was a custom baler for several years. On March 24, 1953,... View Obituary & Service Information

The family of Chris Van Hal created this Life Tributes page to make it easy to share your memories.