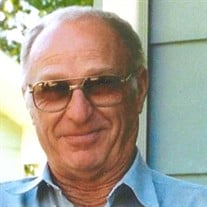 Charles W. (Charlie) Pederson, 83, of Valley City, ND passed away May 27, 2022 at SMP Health- St Raphael in Valley City after a hard fought three year battle with cancer. Charlie was born on September 7, 1938 in rural Barnes County near Nome, ND to Odin and Eva (Bjerke) Pederson. Charlie was raised on a farm southwest of Nome and attended school at Eastedge and Nome. After school he went to work for Collins Construction Company out of Fargo, ND as a heavy equipment operator. He was drafted into the United States Army in September of 1961 and was discharged in August of 1963. He was very proud of his military service and a proud veteran. He continued working in construction, working for Blumer Construction out of Valley City and finished with Fisher Sand and Gravel out of Dickinson, ND until retirement in 2001. Charlie married Karen Harland on March 20, 1965 in Valley City. They had one son, Todd and continued to live in Valley City. Charlie was a lifelong member of St. Petri Lutheran Church. He was a member of the American Legion, VFW, Amvets and Eagles Club. After retirement, being an outdoors person, he spent most of his time on his beloved farm southeast of Nome mowing, gardening, and keeping everything in tip top shape. He was always willing to lend a helping hand to anyone who asked. He loved working and keeping busy. Charlie is survived by his wife, Karen of 57 years; one son Todd and wife, Jennifer, Fargo; four precious grandchildren, Izaach, Maris, Sophie and Eli; one brother, Larry (Leanne), Rapid City, SD; three sisters, Jeannie Johnson, Fargo, Sandi (Doug) Orth, Mobridge, SD and Cindy (Dale) Johnson, Rapid City; two brothers-in-law, Jerry Smith, West Fargo, ND and Gary (Laurel) Lindemann, Enderlin, ND; In-laws, Bill Hill, Valley City, Keith and Sue Colville, Valley City and Douglas and Peggy Harland, Nome; many nieces, nephews and cousins. Charlie was preceded in death by his parents Odin and Eva; one brother Orville and wife Dorothy; two sisters Edith Smith and Marian Lindemann; and one brother-in-law, Bill Johnson. Funeral services will be 11 am Thursday, June 2, 2022 at St. Petri Lutheran Church rural Nome. Visitation will be Wednesday, June 1 from 5-7pm with a prayer service at 7pm at the Oliver-Nathan Funeral Chapel in Valley City. Visitation will continue one hour prior to services at the church. Burial with military honors will be in the St. Petri Cemetery. Funeral arrangements have been entrusted to the care of the Oliver-Nathan Funeral Chapel. An online guest book is available at www.olivernathanchapel.com

The family of Charles W. "Charlie" Pederson created this Life Tributes page to make it easy to share your memories.