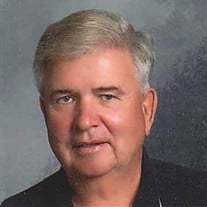 Oliver-Nathan Funeral Chapel Valley City, ND 701-845-2414 Charles Leo Stowman Charles L. Stowman, 69, went onto his eternal home on November 17, 2015, in a Fargo Hospital. A funeral service will be held at 2:00 PM on Monday, November 23 at Our Savior’s Lutheran Church in Valley City. Visitation will be held on Sunday, November 22 from 5:00-7:00 PM at the church and one hour before the funeral service. A prayer service will be held at 7:00 PM on Sunday evening at Our Savior’s. Internment will take place at a later date at Memory Garden Cemetery near Valley City. Charles Leo Stowman the son of Lorraine (Jaeger) and Leo Stowman, was born February 23, 1946 in Valley City, ND. He graduated from Valley City High School in 1964. Chuck obtained a Business Administration degree from the University of North Dakota in 1968 and a Masters of Banking degree from the University of Wisconsin. On September 4, 1966 he was united in marriage to Janice Sundstrom at Nebo Lutheran Church in Valley City. They moved to Valley City in 1971 where he began his career in banking. He was with Farmers and Merchants Bank, now Dacotah Bank, in 1973 until he retired as President in 2001. His love of Valley City was evident by his active involvement in community affairs. He was a city commissioner, Past-President of the Valley City/Barnes County Development Corporation, and of the North Dakota Independent Bank Association. He belonged to the El Zagel Shriners, Elks, and Eagles Clubs. Chuck and Jan made their church home at Our Savior’s Lutheran Church in Valley City. Known to some as Charles, others as Chuck or Charlie. No matter what you called him you knew him as a person of quick wit, sensitivity, humble generosity, and kindness. If he gave you a nickname, you knew you were a very special person to him. Charlie and Jan loved to spend their time with family at their lake cabin on Lake Eunice, Minnesota and they wintered in Sarasota, Florida. He liked to hunt, fish and golf; but more importantly was the time spent with special friends. Above all, his grandchildren were his pride and joy. Chuck is survived by his wife, Jan, Valley City, ND; daughters, Michelle ‘Missy’ Vollmers (Chad) and Amy Kvien (Pete), Bismarck, ND and his son, Charles ‘Casey’ (Amber), Fargo, ND. Five grandchildren, Justin Vollmers, Emily and Anika Kvien, and Kyan and Elin Stowman. Also surviving is a sister, Myra (Wes) Norton, and a special cousin Faye (Ed) Hasche, Bismarck, ND. Sister-in-law, Linda (Lynn) Holcomb, Valley City, ND and a brother-in-law, Jim (Rita) Sundstrom, Venice, FL. Many special nieces, nephews and wonderful friends. He was preceded in death by his mother, Lorraine Stowman Engelstad, his father Leo Stowman, his step-father Chris Engelstad, his grandparents Charles and Myra Jaeger and Charles Perry and Elizabeth Jane Stowman. In lieu of flowers, the family prefers memorials given to Sheyenne Valley Community Foundation – Wellness Center, Valley City State Foundation, and Our Savior’s Foundation. Funeral arrangements have been entrusted to the care of the Oliver-Nathan Funeral Chapel, Valley City. An online guestbook for Chuck is available at www.oliver-nathanchapel.com Sheyenne Valley Community Foundation-Wellness Center: 250 West Main, Valley City, ND 58072 Valley City State Foundation: 101 College Street SW, Valley City, ND 58072 Our Savior’s Foundation: 138 3rd Street NW, Valley City, ND 58072

The family of Charles 'Chuck' Stowman created this Life Tributes page to make it easy to share your memories.

Send flowers to the Stowman family.