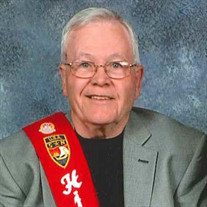 Charles Hanson was born February 3, 1938 in Lisbon, North Dakota, the son of Elvin and Phoebe (Forward) Hanson. In May of 1956, Charles was in a car accident at the age of 18, which resulted of him being permanently disabled. He attended and graduated from Lisbon High School in the class of 1957. He trained at Helmer’s Jewelry in Lisbon and through correspondence he obtained a watchmakers license. These skills were used at Wimmer’s Jewelry, Fargo, ND, and his own repair shop in Enderlin and from 1960-1965 at Myhre Jewelry in Valley City. In the fall of 1967, Charles attended Golden Valley Lutheran College (GVLC) in Golden Valley, MN for a year. While at GVLC he met Estelle Thompson and they were married on July 6, 1969 at Velva, ND. They made their home in Chaska, MN. His skills took him to Rosemont Engineering in Eden Prairie, MN, where he assembled temperature sensors for astronaut space suits that were used on the moon and worked there from 1968-1973. In the fall of 1973, Charles and Estelle purchased Vic’s Jewelry and renamed the business, The Jewel Box. Throughout the following years, there were various business locations and Charles renamed his business Hanson’s Jewelry. He was able to add goldsmithing services to his business and worked there until he passed away. Charles was a member of Our Savior’s Lutheran Church and served in many areas of the church. He was a longtime member of the Valley City Lions Club, holding many offices, including Deputy District Governor under Hadley Seeklander. Charles served on many boards as an advocate for those with disabilities - Freedom Resource Centers, IPAT and the handicapped clubs in Fargo and Valley City. He was voted Outstanding Handicap Citizen in Valley City in 1986 and runner-up in the state competition. He was a member of the Eagles and Valley City Chamber of Commerce. Charles was a former member of the Valley City Jaycee’s, Optimist Club and Gideon’s International. At the time of his death he was serving as President of the Sons of Norway Hjemdal Lodge #481 of Valley City. He is survived by his wife, Estelle; a daughter, Sarah Pruett, Jamestown, ND; two sisters, Winnifred (Chester “Red”) Brostrom, Fargo, ND; Kathleen Seavert, Maple Grove, MN; and three brothers, Duane (Jan) Hanson, Lisbon, ND, Robert (Judy) Hanson, New Brighton, MN and Donald Gilbert, Normal, IL. Charles was preceded in death by his parents and a brother-in-law, Larry Seavert.

Charles Hanson was born February 3, 1938 in Lisbon, North Dakota, the son of Elvin and Phoebe (Forward) Hanson. In May of 1956, Charles was in a car accident at the age of 18, which resulted of him being permanently disabled. He attended and... View Obituary & Service Information

The family of Charles S. Hanson created this Life Tributes page to make it easy to share your memories.