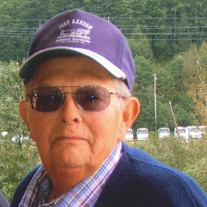 Charles “Charlie” Allen Olson was born May 3, 1935 in Valley City, ND to Carl and Esther (Anderson) Olson. He passed peacefully at Sanford Hospital, Fargo, ND January 28, 2021 at the age of 85. Charles grew up on the family farm, Prairie Dale Farm, with two sisters and two brothers. He attended Brown School and Valley City High School. Charles joined the National Guard and served for three years. In 1958, he married Carol Ann Ott at Trinity Lutheran Church, Valley City. That following year, with his brother Dennis, rented some land and Olson Bros Partnership was formed and continued until 1999 when he retired. In 1963, Charles parents moved to Valley City and Charles and Carol moved to the house he grew up in. Charles loved animals of all kinds, having beef cows, some calves to hand feed and in the early years a small herd of sheep. He was a farmer and always loved the land and all that it provided. Charles loved going to auction sales and was interested in toy tractors and accumulated quite a collection. He was a Nelson Township Supervisor for 25 years, a long time member of the Eagles, Elks and American Legion in Valley City. Charles was a member of Trinity Lutheran Church. Charles and Carol spent 20 winters in Mesa, AZ loving the warm weather. There he played many games of pinochle and became quite a good shuffleboard player, belonging to a league where he made many friends easily and still kept in touch with several of them. After Charles and Carol moved to Valley City in 2005, most days you would see his red pickup going south, with country music playing on the radio to check on crops and neighbors. Charles leaves his wife of 62 years, Carol; sisters, Mavis Stearns and Bonnie Olson all of Valley City. Not having children of his own, he loved all his nephews and nieces. They each had a special place in his heart. Also surviving are his brother-in-law, Jim Ott, Idaho; sister-in-law, Jeanne Ott, Minneapolis, MN and his aunts, Erna Anderson, Valley City and Joyce Potter, New Ulm, MN. Charles was preceded in death by his parents and brothers, Dennis Olson, Ron Olson and Jarl Maasjo. Visitation will be 5:00-7:00 pm, Wednesday, February 3 at Oliver-Nathan Funeral Chapel with a prayer service at 7:00 pm. The funeral service will be 2:00 pm, Thursday, February 4 at Trinity Lutheran Church, Valley City with visitation one hour prior. Due to COVID-19, social distancing and masks will be required. Burial will be at Memory Gardens, Valley City in the spring. The funeral service will be live streamed at https://vimeo.com/506623277 Memorials may be directed to the Barnes County Food Pantry or an organization of your choice in Charles’ memory. Funeral arrangements have been entrusted to the care of the Oliver-Nathan Funeral Chapel, Valley City. An online guestbook is available at www.oliver-nathanchapel.com

The family of Charles "Charlie" Olson created this Life Tributes page to make it easy to share your memories.