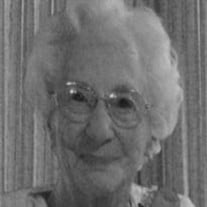 Cecilia A. Soroos passed away at age 99 on January 28, 2009 at Sheyenne Care Center in Valley City, ND. She was born on September 11, 1909, the daughter of John J. Peitz and Mary (Heise) Peitz in Hankinson, ND. Cecilia grew up in Hankinson and attended high school there, where she was active in musical events, basketball, and was an honor student. During the later 1920s, she enjoyed playing piano music for silent movies. Cecilia earned her standard degree from Valley City State Teachers College and taught and coached girls' basketball at Oriska, ND while earning her bachelors degree in education. It was there she met her husband Adolf and they were married in 1939. With the help of Adolf's father, they built their own house in Valley City, where Cecilia lived until after her 98th birthday. At that time she moved into the Sheyenne Care Center. Cecilia enjoyed all things Valley City, particularly participating in and attending a variety of VCSU and community events. Maintaining a life-long interest in education, she often accepted substitute teaching assignments. After Adolf's death, Cecilia welcomed the opportunity to establish the Soroos Scholarship Fund for students at Valley City State University. Cecilia was also a long-time member of PEO and the Congregational (UCC) Church in Valley City. Until recently, she enjoyed her passion for playing bridge and being with friends at the Valley City Country Club. She also loved reading, gardening and watching birds that came to the feeder outside her kitchen window. For many retirement years, Cecilia and Adolf spent winters in Mesa, AZ where they enjoyed activities with many of their Valley City snowbird friends. Cecilia cared for her half-sister Elsie for several years in her Valley City home and in Arizona. Cecilia was preceded in death by Adolf Soroos, her husband of 55 years, and by brothers John (Jeff) and Dudley (Bud) Peitz. Also preceding her in death were her half-sister Elsie Kriesel and half-brother Ed Kriesel as well as beloved nephews James and Donald Peitz. Cecilia is survived by her son Kenneth (Hope) Soroos of Madison, WI, her granddaughters Joanna (Frederick) Mertz and Jennifer (Jason) Stacy, and her great-grandchildren Henry, Leo and Chloe Mertz and Jack and Juliana Stacy. The family would like to especially thank all her friends who came to visit her at Sheyenne Care Center, the staff members there who took such compassionate care of her, and Hospice of Red River Valley.

Cecilia A. Soroos passed away at age 99 on January 28, 2009 at Sheyenne Care Center in Valley City, ND. She was born on September 11, 1909, the daughter of John J. Peitz and Mary (Heise) Peitz in Hankinson, ND. Cecilia grew up in Hankinson... View Obituary & Service Information

The family of Cecilia Soroos created this Life Tributes page to make it easy to share your memories.

Send flowers to the Soroos family.