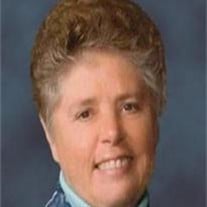 Carole Ruth King was born on April 27, 1943 in Fargo, ND to Guilford and Ruth (Johnson) King. She attended public school in Arthur, ND and Casselton, ND, where she was a 1961 graduate of Lincoln High School. In 1963, she earned an AA degree at Hesston College, Hesston, KS. From 1963 to 1971, she worked as a bank teller and for the telephone company in Casselton and Fargo, ND. She volunteered with the Mennonite Central Committee for a year in the Netherlands. Upon her return to the US, she attended Valley City State College, graduating in 1973 with an Education/Library Science degree. She worked at the Moorhead State University library from 1973-1975. In June 1975, she married Ken Jefferson of Litchville, ND. They made their home on a farm near Litchville. She worked in the library at Valley City State College, which is now Valley City State University, from 1975-2007. She was active in First Lutheran Church, Litchville, where she served on various boards and was a member of Mary Circle. Carole was a past board member of the Litchville Public School District. She enjoyed membership in Delta Kappa Gamma, serving in local and state levels. Carole was an avid reader and encouraged this interest for her nieces and nephews as well as the many other children in her life. She was a 45 year survivor of ovarian cancer and participated in local Relay for Life fundraisers over the years. She was generous with her time and resources. One thing she liked helping with was the local Crop Walk. Carole will be greatly missed by all. She died at her home under the care of her husband, sisters, and Hospice of the Red River Valley on December 22, 2011, after a difficult struggle with cancer. She is survived by her husband, Ken of Litchville; sisters, Mary (Jim) Wenger of Vancouver, WA, Kathy Stevens of Page, ND, and Pearl (Murray) Patterson of Fargo, ND; a brother, Hal (Gillian) King of Sydney, NSW, Australia; 10 nieces and nephews; 12 great nieces and nephews; and her “adopted” mother, Margaret “Peggy” Rose of Valley City. She was preceded in death by her parents; brother, Wayne; baby sister, Irene; and a great niece, Santana Andrade.

Carole Ruth King was born on April 27, 1943 in Fargo, ND to Guilford and Ruth (Johnson) King. She attended public school in Arthur, ND and Casselton, ND, where she was a 1961 graduate of Lincoln High School. In 1963, she earned an AA degree... View Obituary & Service Information

The family of Carole King Jefferson created this Life Tributes page to make it easy to share your memories.