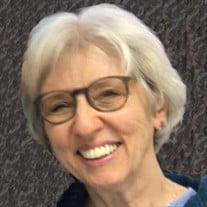 Carol's funeral service can be viewed at https://vimeo.com/659044386 A Celebration of Life Service will be 2:00 pm CST, Monday December 20, 2021 at Trinity Lutheran Church, rural Litchville, North Dakota. Carol Diann (Rockswold) Weiler, age 76 passed away unexpectedly Tuesday, December 14, 2021 at Sanford Medical Facility in Fargo, ND of a brain aneurism. Carol (Rockswold) Weiler was born August 30, 1945 to Selmer and Florence Rockswold of Litchville, ND. She was raised on the Rockswold family farm and graduated from Litchville High School. Carol attended Jamestown College for one year before transferring to Gallaudet College in Washington, D.C., graduating in 1969. After graduation, she moved to Philadelphia and was employed at Jeans Hospital for 34 years. After retiring as a cost accountant at Jeans in 2006, Carol bought a home in Jamestown, ND to be closer to her family, friends and home of her upbringing. Carol lost her hearing in early childhood due to a severe infection. She was awarded girl of the year at Litchville H.S. by her teachers and fellow students for her outstanding academic and sports achievements. She enrolled at Jamestown College and, after one year, on recommendation of her teachers transferred to Gallaudet University for the Deaf to complete her Bachelors degree. She met and married her husband Kenneth Weiler of Philadelphia who also attended Gallaudet. Carol was loved and accepted quickly by everyone she met or worked with for her amazing ability to converse face to face without dependence on sign language. Many people were reluctant to believe she was deaf until they spoke with her a few minutes. Carol was an inspiration to others and always projected her belief in doing your best and leading by example. She had faith in God and encouraged others to have faith in God. She enjoyed family and friends, keeping her home in order and decorated each season, hosting family gatherings, gardening, clothes making, and became a horse owner and avid horseback rider of 15 years. She enjoyed farm life and resided in the Chalfont, PA area for several years on a seven acre property with four horses, dogs and cats with daily chores before and after commuting to work to get her "farm fix" as she would put it. Carol was preceded in death by her parents Selmer and Florence (Belling) Rockswold and her brother Ellis. Carol will be dearly missed by her beloved grandchildren Larissa Weiler and Graham Weiler, her son Jon (Jennifer) Weiler, brother Steven (Faye) Rockswold, sister-in-law Mirtie (Ellis) Rockswold, as well as her nieces, nephews, cousins, hearing and deaf communities and so many on the east coast as well as in the Litchville, ND area. The family requests that memorials be given to the “North LaMoure Cemetery Association” c/o Steven Rockswold 5838 110th Ave. S.E. Litchville, N.D. 58461 Funeral arrangements have been entrusted to the care of Oliver-Nathan Funeral Chapel, Valley City. An online guestbook is available at olivernathanchapel.com

The family of Carol Diann Weiler created this Life Tributes page to make it easy to share your memories.

Send flowers to the Weiler family.