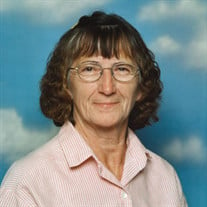 Carol Lorraine Houston, 87, of Valley City, ND passed away Wednesday, February 26, 2020 in Sanford Hospice House, Fargo, ND. Her funeral service will be 2pm Saturday, February 29 at Oliver-Nathan Funeral Chapel, Valley City. Inurnment will be held in Page Cemetery, Page, ND in the spring. Carol Lorraine Brock was born and raised in Page to George and Lorraine (Sample) Brock, February 24, 1933. In 1949, she married Richard Earles and together they had seven children making their home in Tower City, ND. Carol was a member of the First Presbyterian Church, Tower City and was involved with circle at the church. She was known for having a “huge” garden, canning, baking every Saturday, and sewing dresses for her daughters, including a wedding dress, and patchwork for many of the locals in Tower City. After her children were grown, Carol made her home in Valley City working at Pamida and the VCSU cafeteria. On a trip to Washington while visiting family, Carol met Richard Houston whom she married. Carol lived in Washington until Richard’s passing returning to Valley City. The last eighteen years Carol spent her time traveling with her friend Reggie in an RV being “snowbirds” in Canada and Arizona. Carol is survived her children Shirley (James) Stringer; Bob Earles; Christine (Randy) Kuntz; Steve (Rita) Earles; Russell Earles; Randy (Debra) Earles and Bill Earles; 12 grandchildren; 11 great grandchildren and two great great grandchildren. She is also survived by a sister, Gloria Tuthill. Carol is preceded in death by her parents, husband Richard Houston, and her infant twins. Funeral arrangements have been entrusted to the care of the Oliver-Nathan Funeral Chapel. An online guestbook is available at www.oliver-nathanchapel.com

The family of Carol Lorraine Houston created this Life Tributes page to make it easy to share your memories.

Send flowers to the Houston family.