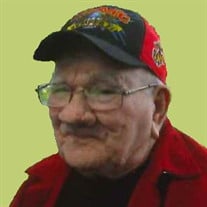 The funeral service for Carl N. Hanson, Jr., 86, Enderlin, North Dakota formerly of Nome, North Dakota will be 2:30 pm Friday at Maryhill Manor, Enderlin. Burial will be in St. Petri Cemetery, Nome. He died Monday, September 7, at Maryhill Manor. Visitation will be one hour before the service at the church. Carl Norman Hanson, Jr., was born January 4, 1929 at Nome, ND, the son of Carl and Norma (Peterson) Hanson. He attended elementary school in Nome and attended grades six through the eighth grade in Valley City. Carl left home at the age of 17 to join the Marine Corp and served during WWII and the Korean War. After being discharge he made his home in Arkansas where he was a police officer. He then moved to Colorado where he was a truck driver. He was preceded in death by his parents, a son, Carl Hanson III, a grandson, Joshua Hanson and a sister, Edna Skramstad. Carl is survived by his wife, Sharon Hanson, Edgley, ND; two sons, William of Pukwana, SD, Earl of CO; two daughters, Sarah (Charles) Russell, Nome, Becky Hanson, Enderlin; and eight grandchildren Funeral arrangements have been entrusted to the care of Oliver-Nathan Funeral Chapel, Valley City, ND. An online guestbook for Carl is available at www.oliver-nathanchapel.com

The family of Carl Norris Hanson Jr. created this Life Tributes page to make it easy to share your memories.