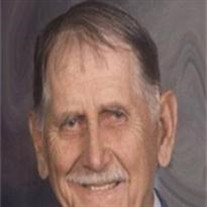 Byron Kenneth Botner was born March 9, 1924 in LaMoure County, ND. His parents were Carl and Inga (Haarsager) Botner. He was baptized May 11, 1924 in the High Prairie Church near Benson Corner in LaMoure County. He was confirmed November 27, 1938 at High Prairie. He farmed with his father until 1947, when the family moved to Pisek, ND. On June 21, 1949, he was united in marriage to Berniece Bubach at Trinity Lutheran Church at Griswold. Byron and Berniece moved back into the Griswold area to start farming in 1952. Byron enjoyed farm life and considered it a privilege to farm. He loved the smell of newly plowed soil, harvest and newly mown hay. He loved his John Deere machinery. He also enjoyed dancing when his health permitted him to do so and enjoyed strumming on his guitar in the evenings. He enjoyed watching TV, his favorite programs were MASH, Cheers, and Andy Griffith, and he loved watching cartoons with the kids on Saturday mornings. He was a long-standing member of the Eagles in Valley City, a member of the Farmers Union and Trinity Lutheran Church. Byron leaves his wife of 61 years, Berniece; 5 children, Lynette (Jeff) Meiers of Ross, ND, Gary (Bernadette) of Valley City, ND, Joey (Nancy) of Litchville, ND, Bradley (Lori) of Litchville, and Scott (Arlene) of Jamestown, ND. He is also survived by 10 grandchildren, Angela (Cole) Garrison, Kelly Meiers, Lindsey Meiers, Brianna Meiers, Brandon Botner, Ryan (Amanda) Botner, Lacey Botner, Kelsey Botner, Jenna Botner, and JoAnn (Corey) Rood; and 2 great grandchildren, Arley Garrison and Olivia Rood. Byron was so proud of his children and he treasured every hug and kiss he got from his children and grandchildren. He was preceded in death by his parents; 4 brothers; and 2 sisters. We cherish his memory and celebrate his life. He died September 23, 2010 at Mercy Hospital in Valley City.

Byron Kenneth Botner was born March 9, 1924 in LaMoure County, ND. His parents were Carl and Inga (Haarsager) Botner. He was baptized May 11, 1924 in the High Prairie Church near Benson Corner in LaMoure County. He was confirmed November... View Obituary & Service Information

The family of Byron Botner created this Life Tributes page to make it easy to share your memories.

Send flowers to the Botner family.