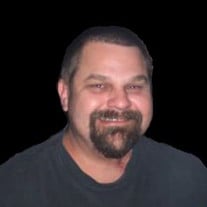 The memorial service for Boyd Wayne Anderson, 52, Jamestown, North Dakota, will be 2 pm Tuesday, October 9, 2018 at Oliver-Nathan Funeral Chapel, Valley City, North Dakota. He died Wednesday, October 3 at Essentia Health Fargo. Boyd Wayne Anderson was born May 11, 1966 at Valley City, North Dakota the son of Lorren and Jean (Schiebe) Anderson. He attended school in Valley City and during those years he delivered the Times-Record to the subscribers of Valley City and eventually started to do the printing of the newspaper. He married Kathy Pfeifer. He started working in Hawley, Minnesota in the late 1980’s until he began working for DL Printing in Detroit Lakes. In the mid 1990’s he began working for Davon Press in West Fargo, North Dakota. Boyd moved to Jamestown in 2004 to work for the Jamestown Sun and eventually became the Pressroom Supervisor, the position he currently held at the time of his death. Boyd was known for his hard work and loving the outdoors. He spent his free time camping, fishing and golfing. He is survived by his wife, Kathy, Jamestown; his son and daughter-in-law, Blake and Laura Anderson of Pelican Rapids, Minnesota; a brother and sister-in-law, Dan and Judy Anderson, Valley City; a sister, Brenda Anderson, Goldsboro, North Carolina; and several nieces and nephews. He is also survived by his dog, Vodoo, his little shadow. Boyd was preceded in death by his parents and a sister, Karen Flynn. Funeral arrangements have been entrusted to the care of the Oliver-Nathan Funeral Chapel. An online guestbook is available at www.oliver-nathanchapel.com

The family of Boyd Wayne Anderson created this Life Tributes page to make it easy to share your memories.