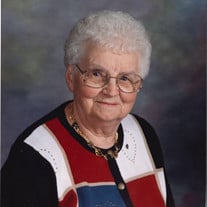 Audrey Lucille Smith, 97, passed from the arms of her family to the arms of God, on February 23, 2020, with her family by her side, at Maryhill Manor in Enderlin, ND. From her birth on November 2, 1922, until her death, she nourished the people around her with faith, love, and lefse. Audrey was born the second of eight children to Alfred and Luella Gilbertson. She attended school in Eastedge for her first ten years, Nome school for one year, and graduated from Kathryn School in 1940. She met James Earl Smith at a dance in Hastings that same year. She saved up her money working on a farm in Ekelson and bought a train ticket to Washington state, where Jim was living. They were married in a double ceremony, with Jim’s sister Florence and Jimmy Wilson, on November 14, 1942, in Wenatchee, WA. They lived and worked in Ardenvoir, WA, before returning to North Dakota. Together they had four children: Charlotte, Gene, Renee, and Jimmy. Audrey and her sister Ruth opened a grocery store and lunch bar in Kathryn that they ran together for several years. After her husband passed away in 1981, Audrey thrived in her own way – always keeping busy, never feeling sorry for herself. She had a love and boundless talent for many things, including quilting, crocheting, gardening, and, perhaps the most well-known, making lefse. She could almost always be found at her Kathryn home, working in her beautiful garden, stitching a complex quilt, or rolling seemingly endless lefse rounds. She sold her lefse at the local café, as well as shipping it all over the US. She even sold her lefse in Norway! She was known as one of the ‘Lefse Ladies.’ Audrey was a devoted member of the Waldheim Lutheran Church. She was a member of the WELCA. She quilted with the women’s group and worked on and donated an untold number of quilts throughout the years. She made sure each and every one of her children, grandchildren, great grandchildren, and great great grandchildren had a quilt lovingly made by her. Audrey left behind a massive legacy, not only in her family and the works she created, but in her approach to life. She passed on a love for ‘doing,’ a way of finding joy in working hard. She was a passionate, dedicated figure of strength, a woman who never waned in her support and love for her family, who soldiered on even when times were tough. These traits were stitched into her character and, like her quilts, they’ve been passed down to every member of her family. Audrey has been reunited in Heaven with her husband James; son Gene; daughter Charlotte; parents Alfred and Luella; and brothers Gordon, Donald, Wesley, and Norman. She is survived by her children Renee and Jim; sister Ruth; brothers Dennis, Harold, and Milo; and numerous grandchildren, great grandchildren, and great great grandchildren.

Audrey Lucille Smith, 97, passed from the arms of her family to the arms of God, on February 23, 2020, with her family by her side, at Maryhill Manor in Enderlin, ND. From her birth on November 2, 1922, until her death, she nourished the people... View Obituary & Service Information

The family of Audrey Lucille Smith created this Life Tributes page to make it easy to share your memories.

Audrey Lucille Smith, 97, passed from the arms of her family...

Send flowers to the Smith family.