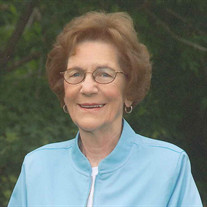 Ardell Skogen, 92, of Valley City, ND passed away peacefully May 31, 2016 at Sheyenne Care Center, Valley City. Ardell was born March 04, 1924 in Minneapolis to Raymond and Olga (Johnson) Lassey. She attended high school in Watford City, ND, graduating in 1942. Ardell received her teaching certificate and taught 2 years at a rural school. She married Melvin Skogen on January 13, 1945 in Williston, ND, after which they moved to the farm near Valley City that he and his father had purchased the previous fall. It is on this farm that they raised their three children and lived until they moved to Valley City in 1974. In the 1960’s Ardell and Melvin established and operated a successful insurance agency along with their farming operation. She worked for the Barnes County ASCS office from 1965 to 1985. She had served on the Sheyenne Care Center board, was a charter member of the Town & Country Homemakers Club, and a member of The Garden Club, BPW and NARFE organizations. Ardell was a member of Our Savior’s Lutheran Church, Valley City, where she was active in her church and also co-chaired the annual bake sale. She enjoyed gardening and her flowers. Ardell was passionate about her family and loved them very much. She is survived by one daughter, Carol (Jerry) Meyers, Erie, ND; two sons, Luther (Linda) Skogen, Valley City, and Allan (Janelle) Skogen, Bozeman, MT; seven grandchildren, Leigh Meyers (Dan Bernhardson), Fargo, ND, Sara (Jeremy) Anderson, Alexandria, MN, Leslie (Chad) Johnson, Burnsville, MN, Jill (Jesse) Chase, Bozeman, Michael (Tiffany) Skogen, Bozeman, Katherine (Kevin) O’Reilley, Missoula, MT and Heather Skogen, Bismarck, ND; eighteen great grandchildren and a niece Debbie Mustain, Yuma, AZ. Ardell was preceded in death by her parents; husband Melvin; two grandchildren, Chad Allen Meyers, Matthew David Skogen; and a brother, Merton Lassey. The funeral service will be 10:30 am Saturday, June 4, 2016 at Our Savior’s Lutheran Church, Valley City, with burial following at Memory Gardens, Valley City. Visitation will be Friday 4-5:30 pm at the Oliver-Nathan Funeral Chapel, Valley City. Memorials may be directed to Our Savior’s Foundation. Funeral arrangements are entrusted to the care of Oliver-Nathan Funeral Chapel. An Online guestbook for Ardell is available at www.oliver-nathanchapel.com

The family of Ardell Skogen created this Life Tributes page to make it easy to share your memories.

Send flowers to the Skogen family.