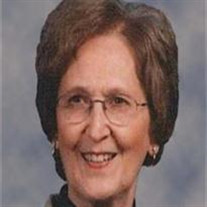 Alyce Lorraine Edinger, the sixth of seven children born to Edward and Annie (Reddig) Edinger, was born on September 5, 1932. She was born in Cathay, ND where she attended school and graduated in 1951. She attended Bismarck Hospital School of Nursing and graduated in 1954 with a Registered Nurse Degree. She worked at Bismarck Hospital in the medical/surgical unit. She was united in marriage to George Schlittenhardt on June 29, 1956 in Bismarck, ND. They made their home in Sioux Falls, SD where she worked at the Sioux Valley Hospital until moving to Valley City in 1959. Alyce was employed at Mercy Hospital and worked in the medical/surgical unit part time while raising their children. In 1964, she worked in the Obstetrical Unit (The Baby Place) in Valley City for 38 years and retired in 1998. Those were such rewarding years in her life. The joy of her life was being a wife to George and a mother to five children, a grandmother to eight and three great grandchildren. Her love and devotion to the Lord colored every aspect of her life. It was evident by her love of family, and her gift of nursing. Alyce found great pleasure in helping others and frequently quoted, “I love what I do and do what I love!” She will be remembered by her loving and giving spirit. Every day she lived was a gift. No matter what the circumstance, she always found a blessing throughout her long journey with lung cancer. She enjoyed family gatherings and was always interested in knowing every detail about her family which kept her close in each of their lives. She also loved reading, prayer walking, volunteering at the hospital and was known for the best frosted cut out cookies. Alyce would do anything if she knew it would help someone now or in the future. She gave generously from the heart. She was a member of Epworth United Methodist Church, United Methodist Women, Sunny Circle and presented the spiritual growth at each meeting. She taught Sunday School when her children were growing up and sang in the church choir. Upon retiring she was a member of the Mercy Hospital auxiliary and did volunteer work. At the age of 80, Alyce passed from this life to heaven on September 10, 2012 at home. She was surrounded by her loving family and was under the care of Hospice of the Red River Valley. Alyce will be deeply missed. She is survived by her husband of 56 years, George; children, Connie (Gary) Retterath, Darcy (Mike) Beilke, Kelly (Neil) Pederson, Jeff (Connie) Schlittenhardt. She is also survived by grandchildren, Brady (Kristin) Retterath, Megan Retterath, Dustin Beilke, Cody Beilke, Melissa Pederson, Chris (Jamie) Olson, Talon Schlittenhardt, and Kaylee Schlittenhardt; and great grandchildren, Cooper Retterath, Callie Retterath, and Caden Olson. Her siblings, Irma (Orville) Meth, Coral Trochmann, Wallace (Carol) Edinger, Dennis (Moneen) Edinger, and Richard (Judy) Edinger as welll as many nieces and nephews also survive. Alyce was preceded in death by her parents; a daughter, Vicky (Jeff) Olson; and a sister, Myra Boelke.

Alyce Lorraine Edinger, the sixth of seven children born to Edward and Annie (Reddig) Edinger, was born on September 5, 1932. She was born in Cathay, ND where she attended school and graduated in 1951. She attended Bismarck Hospital School... View Obituary & Service Information

The family of Alyce Schlittenhardt created this Life Tributes page to make it easy to share your memories.

Send flowers to the Schlittenhardt family.