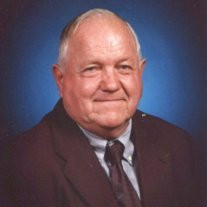 Alvin Pinke, 78, Valley City, ND, passed away October 11, 2013, with his family by his side. Alvin Henry Pinke was born on November 11, 1934, in Marion, ND, to Leo and Mildred (Wirrenga) Pinke. He grew up on a farm outside of Marion and graduated from Marion High School in 1953. He attended Valley City State College for two years before enlisting in the Army in 1955. Alvin married Olga Peterson on December 16, 1956, and their son, Timothy, was born in 1965. Alvin served in the National Guard from 1957-61. After his military service, Alvin worked as a mechanic at Geisler Implement from 1961-70, and then began his 30-year career with the Valley City Public Works Water and Sewer Department, retiring in 2000. He enjoyed farming with Dick Monson in his retirement. Alvin was a loyal and unending supporter of athletic programs in Valley City. He and Olga were named Fans of the Year from VCSU in 1999 and from the Hi-Liners in 2005. In 2013, he was given an Individual Citizen Award from the ND Recreation and Park Association for advancing parks and recreation for quality of life in ND. Alvin was also an active member of Our Savior's Lutheran Church volunteering as an usher for 40 years. Alvin's three grandchildren meant the world to him. He loved playing with them when they were little and never tired of throwing a ball around. He enjoyed watching their sporting activities and talking about them with friends. Alvin had a special passion for baseball and helping people. He volunteered with the American Legion Baseball program for 26 years and touched the lives of many people. The party held in his honor in December of 2012 touched him deeply. He was honored to be inducted into the American Legion Baseball Hall of Fame in 2003. He served as a trustee for the American Legion Post #60 for the last 8 years. He is survived by his wife, Olga; son Tim (Nancy) Pinke; Grandsons Austin (22), Kyle (19) and Noah (16) all St. James, MN. The funeral service for Alvin Pinke, 78, Valley City, ND, will be 10:30 A.M., Friday, October 18, 2013 at Our Savior's Lutheran Church in Valley City. Visitation will be held at the Oliver-Nathan Funeral Home on Thursday, October 17, from 4:00 -7:00 PM, with a prayer service at 7:00. Oliver-Nathan Funeral Home has been entrusted with handling arrangements. Please share your thoughts or special stories in Alvin's online guest book at www.oliver-nathanchapel.com

Alvin Pinke, 78, Valley City, ND, passed away October 11, 2013, with his family by his side. Alvin Henry Pinke was born on November 11, 1934, in Marion, ND, to Leo and Mildred (Wirrenga) Pinke. He grew up on a farm outside of Marion and graduated... View Obituary & Service Information

The family of Alvin Henry Pinke created this Life Tributes page to make it easy to share your memories.

Send flowers to the Pinke family.