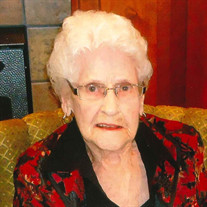 Alma Lenora Kuder, age 95, a life long Barnes County resident, passed away Monday, October, 30, 2017 at her farm home surrounded by her loving family. Alma Radke was born July 23, 1922 at Wimbledon, North Dakota the daughter of Edward and Gertrude (Joos) Radke. She attended Uxbridge Consolidated School southeast of Wimbledon for the first eight grades and one year at Oriska Public School. Following her father Edward’s death, the family relocated to Valley City in the fall of 1937 where she graduated from Valley City High School in 1940. After high school, Alma attended Wahpeton State School of Science for one year. She began her secretarial career at Travelers Insurance and Land O’Lakes Creamery both in Valley City. She was a member of the Epworth United Methodist Church in Valley City. Alma went on to marry Walter R. Kuder on April 7, 1948 in Valley City. They farmed together on the homestead farm in rural Rogers along with their sons until Wally’s death in 2013. Alma continued to reside on the farm for 69 years. She was the consummate hard working rural farm wife, growing and tending a large garden, canning and freezing the produce, raising chickens and selling the eggs. She was a wonderful cook and baker, producing the best ever array of Christmas cookies and candy. As her grandchildren said, “a good cookie or bar cures a lot of things”!! She was the center of the family and always put everyone else’s needs before her own. In the early years, Alma and Wally attended Saturday night dances in Valley City and enjoyed times with neighbors and friends. In later years, Alma spent time knitting and doing needle work and would look forward to time spent with children, grandchildren and great-grandchildren and her sister, Lila. She was proud to have been a member of the East Rogers Homemakers’ for 68 years and looked forward to the monthly club meetings. Alma is survived by her four children, Terry, Kyp and Jo Nelle Kuder of Rogers, Renee (Kevin) Christ of Bismarck; two grandchildren, Nick (Amy) Christ of Bismarck and their children, Hudson and Lincoln and Bridget Christ and her significant other Micah Amos of Omaha, NE; a sister, Lila Tait of Valley City; two nieces, one nephew, several cousins and furry friend, Chloe. Alma was preceded in death by her husband, Wally, parents, brothers, Leo, Laverne, Mervin and one nephew. Funeral services will be held at 1:00 p.m. Saturday, November 4, 2017 in the Epworth United Methodist Church in Valley City, North Dakota. Visitation will be from 5 to 7 p.m. Friday evening in the Oliver-Nathan Funeral Home of Valley City, ND and will continue one hour prior to services at the church on Saturday. Interment will be in Memory Gardens, Valley City, North Dakota. The Oliver-Nathan Chapel of Valley City has been entrusted with the arrangements.

The family of Alma Lenora (Radke) Kuder created this Life Tributes page to make it easy to share your memories.