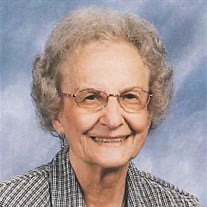 Alice Martha Haseleu Lebahn left this world to enter her heavenly home on October 11, 2016 at the age of 95. Alice was born to Arthur and Marie (Alber) Haseleu in LaMoure County, Prairie Township on June 26, 1921. She was baptized at the Trinity Lutheran Church where she attended confirmation and participated in youth group activities, and where a neighbor boy, Elmer Lebahn caught her attention. She attended country school through eighth grade which prepared her for high school in Marion, North Dakota, graduating in 1939. After graduation, Alice attended Valley City Teachers College, and taught in country schools in Prairie Township. Elmer began a courtship with Alice which progressed into marriage on June 18, 1942 at the Trinity Lutheran Church. They began farming, and to the union three children were born, Lonny, Cheryl and Terry. Elmer died in 1981. In 1956, Alice returned to teaching at a one-room school house and moved to Litchville School in 1958, where she taught second grade. For many summers she attended classes at the Valley City State College. Early in life, it was evident that Alice had musical talent. She started with piano lessons at an early age and began playing the pump organ at the Trinity Church in 1948. The church purchased an electric organ shortly thereafter and Alice continued playing for 37 years. She was a vocal soloist, choir director, a member of the women’s group and participated in other church activities. Her talents extended to hand crafts, quilting and crocheting items for family and as church projects. One of her hobbies was raising violets in her home and tending to her lovely flowers in the yard. In retirement, she busied herself with community work, volunteering at the Sheyenne Care Center, serving on the board from 1992-1997. She was an active member and served on the Senior Citizens board for several years. Alice moved to Valley City in 1992. Her favorite dance partner was Nels Christensen, whom she married in April 1994. Nels died in September 2002. Alice remained living in Valley City and eventually moved to Bridgeview Estates in 2008. In 2016 she moved to Sheyenne Care Center. She is survived by her children: Lonny (Fran) from Mendota Heights, Minnesota, Cheryl (Larry) Hegvik of Litchville, North Dakota, and Terry (Lenore) of Valley City, North Dakota, six grandchildren and their spouses, fifteen great-grandchildren, one sister, Dorothy Rief, of Waconia, Minnesota, and numerous special nieces and nephews. Preceding her in death were Elmer, Nels, one grandchild, her parents, one sister and four brothers. Visitation will be held October 14, from 4 pm to 6 pm with a prayer service at 6 pm at Our Savior’s Lutheran Church, Valley City. The funeral service will be held on October 15, starting at 10:30 am at Our Savior’s Lutheran Church. Burial will be in Trinity Cemetery rural Litchville. Funeral arrangements have been entrusted to the care of the Oliver-Nathan Funeral Chapel, Valley City. An online guestbook is available at www.oliver-nathanchapel.com

Alice Martha Haseleu Lebahn left this world to enter her heavenly home on October 11, 2016 at the age of 95. Alice was born to Arthur and Marie (Alber) Haseleu in LaMoure County, Prairie Township on June 26, 1921. She was baptized at the Trinity... View Obituary & Service Information

The family of Alice Marie Lebahn created this Life Tributes page to make it easy to share your memories.

Send flowers to the Lebahn family.