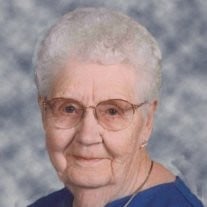 Alice Otelia Sorenson was born November 19, 1918 in Kindred, ND, the daughter of Albert and Olga (Egge) Sorenson. She was baptized, December 15, 1918 at home near Warren, ND. In 1933, she was confirmed at Christina Lutheran Church, rural Kindred. Alice’s home church was St. John’s Lutheran Church, which now stands in Bonanzaville in West Fargo, ND. She attended school in District 116, Warren, ND, near Kindred. On August 8, 1945, she married O. Wesley Horsager at Trinity Lutheran Church, Moorhead, MN. They made their home in Black Loam Township, LaMoure County, near Litchville, ND. Alice helped on the farm while Wesley was in the service. In 1953, they moved to Oak Hill Township in Barnes County, just southwest of Kathryn. She worked at the ND WinterShow Café, Land O’ Lakes, and also did some housekeeping. They retired from farming in 1978, but continued to live on the farm until Wesley died December 20, 2008. She entered the Sheyenne Care Center in Valley City, ND in 2009. She was a member of Nordheim Lutheran Church, where she was the organist, until its closing and then became a member of St. Paul’s Lutheran Church. Alice played the organ at St. Paul’s also, retiring in November 2002. She sang for many weddings and funerals. She was a WELCA member. Quilting at church was one of the things she enjoyed the most. She was always willing to give a helping hand when needed. When asked, “What is one of the greatest inspirations in your life”. Alice wrote, Living on the farm. Enjoy the fresh air working in my garden and flowers. Taking care of the animals. If I ever have to move to town, I will not be happy.” , although she did make the best of it. Alice died Sunday, July 7, 2013 at the Sheyenne Care Center. She is survived by her son, Wayne (Coni) of Valley City; daughters, Diane (Tom) Bohlman of Blaine, MN and Sandra Berg of Cambridge, MN; 7 grandchildren; and 14 great grandchildren. She was preceded in death by her parents; husband, Wesley; a son-in-law, Leonard Berg; a brother Gorden Sorenson; and sisters, Myrtle Jensen and Hazel Belling. In lieu of flowers, donations to the Nordheim Cemetery Fund (c/o Danny Nelson, 5343 SE 115th Ave., Kathryn, ND 58049) have been suggested. The funeral service for Alice Horsager, 94, Valley City, ND, formerly of Kathryn, ND, will be 2:00 p.m., Saturday, July 13, 2013 at St. Paul’s Lutheran Church, Kathryn. Burial will be in Nordheim Cemetery, rural Kathryn. Visitation will be on Friday from 4:00 p.m. until 7:00 p.m. at the Oliver-Nathan Funeral Chapel, Valley City and will continue on Saturday an hour prior to the service. Funeral arrangements for Alice have been entrusted to the Oliver-Nathan Funeral Chapel. An online guestbook is available at www.oliver-nathanchapel.com

Alice Otelia Sorenson was born November 19, 1918 in Kindred, ND, the daughter of Albert and Olga (Egge) Sorenson. She was baptized, December 15, 1918 at home near Warren, ND. In 1933, she was confirmed at Christina Lutheran Church, rural Kindred.... View Obituary & Service Information

The family of Alice Horsager created this Life Tributes page to make it easy to share your memories.

Send flowers to the Horsager family.