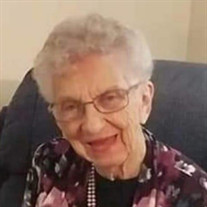 Agnes Lorraine (Olson) Ourenhagen, 99, of Enderlin, North Dakota passed away peacefully, Saturday, May 21, 2022 at Sanford Hospital, Fargo, North Dakota with her loving family by her side. Agnes was born February 1, 1923 to Gilbert and Molly (Storlee) Olson in rural Enderlin. Agnes was a life time member of Fillmore Lutheran Church, rural Enderlin until its closing. She then joined First Lutheran Church, Enderlin. She attended rural Moore School. Agnes was united in marriage to Orville Richard Ourenhagen on June 23, 1944 at Fillmore Lutheran Church. They made their home on a farm in rural Enderlin where they were engaged in farming. They welcomed their only child, Darrell Richard Ourenhagen on June 14, 1953. He was their pride and joy. Orville was killed in a tragic farming accident on January 21, 1956. Agnes continued raising cattle, sheep and horses until Darrell started school. Agnes then sought employment at Hillcrest Manor later renamed Maryhill Manor where she worked for 43 years until her retirement due to a leg injury. She always said “If it weren’t for this leg, I would still be working there!” Upon Agnes’s son, Darrell’s marriage in 1985 she moved in with her sister, Anna Green, rural Enderlin. She cared for Anna until 2001 when Anna entered Maryhill Manor. Agnes then moved to her apartment in Enderlin. Agnes enjoyed her many years of working, serving lunches at Fillmore Lutheran, gardening, canning, cooking and baking. Each year after the Fillmore Christmas program she invited many neighbors to her home for coffee and goodies. Agnes cherished her time with her son and family, grandchildren, relatives and anyone who knocked at her door to visit. She always kept refreshments and treats on hand. Agnes is survived by her son Darrell (Margie) Ourenhagen of Enderlin; three grandchildren Dennis Hanenberg, Jeanie Ourenhagen and Jody (Mark Andel) Ourenhagen; five great grandchildren McKayla Ruff, Michael Johnson, Maci Johnson, Arya Andel and Kali (Garnet) Robinson and two great-great grandchildren, Kayson Robinson and Jordyn Robinson. Agnes is also survived by her brother Glenn Olson, Edgeley, North Dakota along with numerous nieces and nephews. Agnes was preceded in death by her husband, Orville; her parents; a brother Einar Olson; six sisters, Jennie Anderson, Anna Green, Edna Olson, Gladys Green, Olga Severson, Dorothy Jordet and her special friend LeRoy Dagman. Funeral arrangements have been entrusted to the care of Oliver-Nathan Funeral Chapel. An online guestbook is available at olivernathanchapel.com

Agnes Lorraine (Olson) Ourenhagen, 99, of Enderlin, North Dakota passed away peacefully, Saturday, May 21, 2022 at Sanford Hospital, Fargo, North Dakota with her loving family by her side. Agnes was born February 1, 1923 to Gilbert and Molly... View Obituary & Service Information

The family of Agnes Ourenhagen created this Life Tributes page to make it easy to share your memories.

Send flowers to the Ourenhagen family.