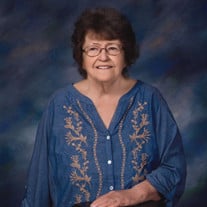 Agnes (Aggie) Arlene Modahl (Hass) was born November 4th, 1935 at Sisters of Mercy Hospital in Valley City, ND to Andrew and Clara (Larson) Modahl. Aggie died at the Sheyenne Care Center in Valley City on September 23, 2019. Aggie was baptized on January 1, 1936 and confirmed at Zion Free Lutheran Church, Green Township, Valley City. Aggie went to school at Green Consolidated School in Valley City and graduated class of 1949. She attended Valley City College High School and graduated in 1953. She attended Valley City State Teachers College and graduated August 1957. Aggie taught at Haugen School, Wahlum in 1955 and Lake Town School, Dazey, in 1957. Aggie met her love, William A. Hass Jr in 1954 and they were married on September 19th, 1957. After they were married, William and Aggie bought her parents machinery, livestock, and rented the land and started farming. During this time, they welcomed sons’ William A. Hass III in 1958 and Michael W. Hass in 1959. In the fall of 1960, they moved to Fort Ransom, ND and farmed there until April of 1966. During this time, their third son Richard A. Hass and fourth son Timothy J. Hass were born. In the spring of 1966, Bill and Aggie moved to the Hass farm in Ashtabula Township and welcomed their baby girl, Kristine M. Hass (Smith) in 1967. Bill and Aggie farmed until 1977. Aggie spent some time working at Farmers Union and the Bus Depot in the Charmac Hotel. Aggie then worked at the Pizza Corner Factory until retiring in 2007. Aggie was a member of The Ashtabula Homemakers Club, The Birthday Club, Grace Free Ladies Aid, CIRCLE, and WMF, Women’s Missionary Fund. Aggie loved to crochet, knit, craft, and baked the best rice crispy bars and apple pie. She loved to travel, read, and play Bingo with her friends at the Eagles and VFW. She loved to watch Jeopardy and you could find her every morning with a cup of coffee watching Price is Right. Aggie always gave 20’s to her grandchildren to shop with at Walmart and loved to color with them. Aggie is survived by her husband of 62 years, William A. Hass Jr.; children, William (Linda) Hass III, Michael (Sherry) Hass, Richard (Jeannie) Hass, Tim (Vicki) Hass, and Kristine (Rick) Smith; 16 grandchildren, nine great-grandchildren, many cousins, nieces, nephews, and friends. Aggie was preceded in death by her parents, Andrew and Clara (Larson) Modahl; her sister Evelyn (Reuben) Emberson, brother Vernon (Blanche) Modahl, and baby girl sister. Visitation will be held at Grace Free Lutheran Church, Valley City, Monday, September 30 from 5-7 pm with a prayer service at 7:00 pm. Visitation will continue one hour prior to the funeral service. The funeral service will be 10:30 am, Tuesday, October 1 at Grace Free Lutheran Church, Valley City. Burial will be at Hillside Cemetery, Valley City. Funeral arrangements have been entrusted to the care of Oliver-Nathan Funeral Chapel, Valley City. An online guestbook is available at oliver-nathanchapel.com.

The family of Agnes "Aggie" Hass created this Life Tributes page to make it easy to share your memories.

Send flowers to the Hass family.