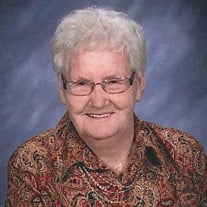 The funeral service for Adeline Zaun, 96, Valley City, North Dakota will be 10:30 Wednesday, September 6, 2017 at Trinity Lutheran Church, Valley City. Visitation will be one hour before the service at the church. Burial will be in Memory Gardens, rural Valley City. Adeline died August 31, 2017 at the North Dakota State Hospital, Jamestown. Adeline Marie Magnuson was born July 15, 1921 in Valley City, the daughter of Samuel and Emma (Hass) Magnuson. When she was five years old the family moved to a farm in Grand Prairie Township, Barnes County, North Dakota. She attended and graduated from Grand Prairie School where she also played basketball and was an All State Guard in 1939. She was united in marriage to Paul Zaun on June 22, 1939. They made their home in Valley City until moving to California in 1951. Adeline worked in different places until 1961 when she began working at Lockheed Aircraft. In 1976, they moved back to the Valley City area where they bought a hobby farm and lived there until 1998 when they moved to Valley City. Adeline was baptized and confirmed at Trinity Lutheran Church, where she was now a member and was also active in Lois Circle. Adeline is survived by one daughter, Darlene (Roz) Zaun, North Hollywood, California; one son, Leo Zaun, Valley City; a son-in-law, James Newell, Oregon; Becky Humble, Valley City; 15 grandchildren, 22 great grandchildren and nine great great grandchildren. She is also survived by two brothers, Lloyd (Betty) Magnuson, Montana, LeRoy (Karen) Magnuson, Valley City; one sister, Betty Englehart, Spokane, Washington; and many nieces and nephews. She was preceded in death by her parents, her husband, two sons, Curtis and Norman, a daughter, Pauline Newell, a granddaughter Carolyn Newell, a brother, Harold and three sisters, Della Swenson, Evelyn Zaun and Helen Gilbo. Funeral arrangements have been entrusted to the care of the Oliver-Nathan Funeral Chapel, Valley City. An online guestbook is available at oliver-nathanchapel.com

The funeral service for Adeline Zaun, 96, Valley City, North Dakota will be 10:30 Wednesday, September 6, 2017 at Trinity Lutheran Church, Valley City. Visitation will be one hour before the service at the church. Burial will be in Memory... View Obituary & Service Information

The family of Adeline Marie Zaun created this Life Tributes page to make it easy to share your memories.

Send flowers to the Zaun family.