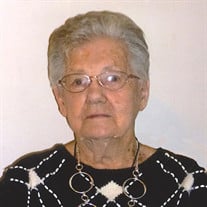 Adelaide (Addy) J. Peterson, 97, of LaMoure, ND passed away Tuesday, November 13, 2018 at St. Rose Care Center surrounded by her family. Adelaide Jeanette (Sando) Peterson was born March 24th, 1921, in Kathryn, ND to Josephine and John Sando. At a young age, Addy started working in the restaurant business for her dad at his Tavern in Kathryn. Addy married Lloyd Peterson on October 13th, 1941 and they made their home on a farm near Benson Corner. Her previous experience working for her father led her to owning her own restaurant in Hastings during the 1950’s. Lloyd and Addy then moved to LaMoure, ND in the late 1960’s where she worked at the Dairy Bar for many, many years. Addy was one of the kindest people you would ever meet. She opened her heart and home to anyone. Addy enjoyed baking and entertaining others. When you went to visit, you were always greeted with a cup of coffee, a fresh baked cookie and her beautiful smile. Addy is survived by her son, Mike (Alexa) Peterson, Renton, WA; her sister Margret Siler, Menomonie, WI; three granddaughters, Heather (Roddy) Gentzkow, LaMoure, ND, Heidi (Tyler) Zimmerman, Leonard, ND and Kim Brown, WA. She is also survived by her beloved great-grandchildren, Tyla Aberle (Jade Huether), Elliot, ND, Hayden Aberle, LaMoure, ND, Kelci Nelson and Rya Zimmerman both of Leonard, and one great- great -granddaughter, Hadley Jade Huether whom she loved very much. She was preceded in death by her husband, Lloyd Peterson, parents Josephine and John Sando, a brother Rolf Sando, and a sister Edna Olson. Visitation will be at Zoar Lutheran Church, LaMoure, Monday, November 19, 2018 from 9-10:30 am with the funeral service at 10:30 am. Burial will be at Memory Gardens, Valley City. Funeral arrangements are entrusted to the care of the Oliver-Nathan Funeral Chapel, Valley City. An online guestbook is available at www.olivernathanchapel.com.

The family of Adelaide "Addy" J. Peterson created this Life Tributes page to make it easy to share your memories.