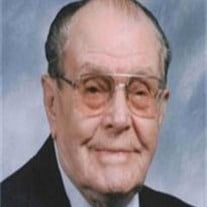 Albin Herbert Peterson was born in Spring Creek Township, Barnes County, ND on October 14, 1915 to Emil and Ida (Kulsrud) Peterson, the third of six children. He was baptized at Spring Creek Lutheran Church and confirmed at First Lutheran Church. Herbert attended school at the Norberg and Spring Creek schools. At the age of 12, he began singing and playing accordion and piano for the community, school, and church functions. He played with a band called the Rhythm X Band at area events. On February 21, 1940, he married Ellen Dorothy Smith at Fort Ransom. They made their home on a farm southeast of Litchville. In 1945, they moved to his father’s farm, less than two miles away, where they farmed until moving to a farm in Marsh Township south of Valley City in 1951. Ellen passed away in 1994 and he continued to farm there until retiring in 1995. In 2006, he moved into the Sheyenne Care Center. He died there on September 12, 2012. He was a member of Our Savior’s Lutheran Church where he taught Sunday School classes for a number of years and also served as an usher for many years. Herbert was a past member of the Eagles, American Legion, and Sons of Norway. He served on the Spring Creek and Marsh Township boards for much of 50 years. Herbert is survived by his sons, Gary and Monte (Penny) both of Valley City; daughter, Coral (Jerry) Reberg of Mercedes, TX; 8 grandchildren; and 11 great and 7 great great grandchildren. His sister, Myrna Botner of Moorhead, MN as well as many nieces and nephews also survive. He was preceded in death by his wife and siblings, Mervil, Hazel Willison, Kenneth, and Orley.

The family of A. Herbert Peterson created this Life Tributes page to make it easy to share your memories.